The 2017 Turnbull Stakes results will be known this afternoon and it is expected to be Winx that takes out the Group 1 event at Flemington. 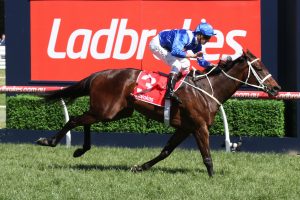 Winx will be the star attraction at Flemington for Turnbull Stakes Day. Photo by: Ultimate Racing Photos

Winx has achieved a great deal during her racing career, but this is her first opportunity to claim victory at Flemington and she is an odds-on favourite to add a 14th Group 1 victory to her racing resume.

Standing in her way is Darren Weir-trained Humidor and he heads into the Turnbull Stakes on the back of a simply outstanding victory in the Makybe Diva Stakes.

The Turnbull Stakes is not the only big race on this card and we will be treated to stack of entertaining races right throughout the afternoon.

The Blazer Stakes, Gilgai Stakes, UCI Stakes and Edward Manifold Stakes will all be key form references during the 2017 Spring Racing Carnival and they are all very interesting betting affairs.

Keep coming back to horseracing.com.au all afternoon to stay up to date with all the Turnbull Stakes Day results!

Nomothaj and Rainier fought out the finish in the Maribyrnong Trial Stakes. Photo by: Ultimate Racing Photos

Nomothaj held-off a flying Ranier to win the Maribyrnong Trial Stakes at Flemington this afternoon.

It looked as though that Ranier had caught Nomothaj in the shadows of the post to give Godolphin the victory, but Nomothaj got her head down at the right time to deliver the Lindsay Park team another win in the Maribyrnong Trial Stakes.

Hayes said that Nomothaj is a precocious type, but at this stage he doesn’t have any firm plans with the Snitzel fily.

Snitzepeg recorded an upset win in the Antler Luggage Stakes at Flemington this afternoon. Photo by: Ultimate Racing Photos

Snitzepeg survived a protest to record an upset win in the 2017 Antler Luggage Stakes at Flemington this afternoon.

Trainer Darren Weir was not expecting a great deal from Snitzepeg, but the promising three-year-old showed an impressive turn-of-foot when asked for an extra effort.

The connections of second placegetter Brave Tango lodged a protest, but it was quickly dismissed by Racing Victoria stewards.

Main Stage ran down a gallant Cliff’s Edge to win the 2017 UCI Stakes at Flemington this afternoon.

Cliff’s Edge took up the running in the early stages of the UCI Stakes and he kicked clear to look like the winning at the top of the straight. 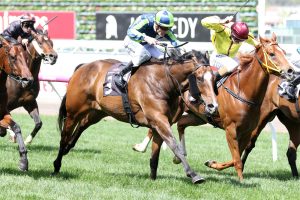 Keen Array led from start to finish to record a tough win in the 2017 Gilgai Stakes at Flemington this afternoon.

It was all about Spieth and The Quarterback in the lead-up to the Gilgai Stakes, but they were never able to get into the race and it was left to the on-pacers to fight out the finish.

Sold For Song and Malibu Style dove at Keen Array late, but Mark Zahra timed his ride to perfection and the Lindsay Park-trained galloper held-on to record a very narrow win.

Winx recorded a maiden win at Flemington in the 2017 Turnbull Stakes. Photo by: Ultimate Racing Photos

Winx cruised to an absolutely dominant win in the 2017 Turnbull Stakes at Flemington this afternoon.

The wonder mare got a long way back in the early stages of the Turnbull Stakes, but she cruised into the race without being asked for an extra effort and she ambled to the lead at the top of the straight.

Hugh Bowman asked Winx for an extra effort at the 250 metre mark and she raced away from her rivals to record the most dominant of wins.

Bring Me Roses stamped herself as a VRC Oaks contender with her win in the Edward Manifold Stakes. Photo by: Ultimate Racing Photos

Bring Me Roses savaged the line to record an impressive win in the 2017 Edward Manifold Stakes at Flemington this afternoon.

Leather’N’Lace hit the front at the 300 metre mark and looked as though she had the race shot to bits, but Bring Me The Rose stormed from the pack and showed an explosive turn-of-foot in the final 200 metres.

The Edward Manifold Stakes win of Bring Me The Rose was her maiden victory and the Thousand Guineas next weekend is now an option.

Amelie’s Star could hardly have been more impressive in the 2017 The Bart Cummings. Photo by: Ultimate Racing Photos

Amelie’s Star secured ballot-exempt entry into the 2017 Melbourne Cup with a dominant win in the 2017 The Bart Cummings.

Granddukeoftuscany took up the running in the early stages of The Bart Cummings and he ensured that the race was run at a very genuine tempo.

Melbourne Cup winner Almandin looked as though he was cruising into the race, but Amelie’s Star responded extremely well when she was asked for an extra effort and she proved too good for her rivals.

Now Or Later showed an impressive turn-of-foot to win the 2017 Blazer Stakes at Flemington this afternoon.

Merriest hit the front at the 150 metre mark and looked as though she would claim back-to-back wins in the Blazer Stakes, but Now Or Later absolutely rocketed home in the last 100 metres to record an upset win.

The Blazer Stakes victory of Now Or Later was the biggest of her racing career to date and she is likely to press on to the Myer Classic.

Pure Pride returned to winning form with an impressive win in the 2017 Paris Lane Handicap at Flemington this afternoon.

There were a host of winning chances at the 200 metre mark, but Pure Pride showed an impressive turn-of-foot to emerge from the pack in the final stages.

Wyndspelle ran on nicely, but he was no match for Pure Pride, who recorded just the second win of her racing career.