January 10, 2020 by Mark Mazzaglia
Home > Snowden could get last laugh with Nitrous in Magic Millions 2yo Classic

Nitrous might be the outsider of Team Snowden’s four runners in the Saturday’s $2m The Star Gold Coast Magic Millions 2yo Classic (1200m) at the Gold Coast, but the stable cold have the last laugh if the Deep Field colt runs up to expectation. 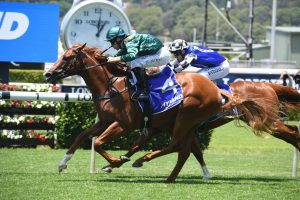 Nitrous, above, is one of four Peter and Paul Snowden trained runners in the 2020 Magic Millions 2yo Classic at the Gold Coast. Photo by Steve Hart.

Nitrous is marked at $26 with Ladbrokes.com.au and is the winner of two of his three race starts and with victories at Canberra and Randwick has earned a touch over $95,000 in earnings which has given him a chance to collect some of the two million dollars prizemoney on offer for the two year olds.

“I don’t think Nitrous should be underestimated. He will be competitive,” co-trainer Peter Snowden said.

“He did it well at Canberra and it was another professional effort at Randwick. This bloke made his own luck.”

“He’s a tough customer and continues to improve. He’ll go to the Gold Coast now for the Magic Millions and it’s more than just a throw at the stumps.”

Hugh Bowman takes over from Tommy Berry on Nitrous who looks likely to jump from gate nine in the final sixteen horse Magic Millions 2yo Classic field after two of the five emergencies drew inside of him.

Berry takes the ride on the Peter and Paul Snowden trained Aim who is the ruling favourite at $5.50 ahead of his stablemate King’s Legacy on the third line of betting at $7 while Team Snowden’s fourth runner in the magic Millions 2yo Classic, Stellar Pauline, is marked at $20.

Aim has drawn in close at barrier two while King’s Legacy will jump from gate seven with Kerrin McEvoy in the saddle and Brenton Avdulla’s mount Stellar Pauline looks likely to come out gate eleven.

Bowman and Berry will both be chasing a third win in the Magic Millions 2yo Classic while McEvoy will be hoping for back to back victories after saluting on the James Cummings trained Exhilarates last year.