A Newmarket Handicap campaign in the Autumn for Unpretentious hinges on the four year old’s performance in the Listed $120,000 TMB Printing Kevin Heffernan Stakes (1300m) at Sportingbet Sandown Park today. 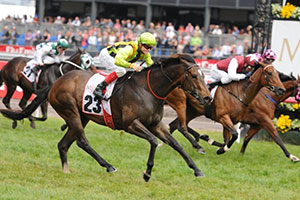 A Newmarket Handicap campaign for Unpretentious will depend on their performance at Sandown. Photo by: Steve Hart

Cranbourne trainer Nikki Burke has taken the unusual step of testing Unpretentious at weight for age today after taking out the Listed $150,000 MSS Security Sprint (1200m) at Flemington on Melbourne Cup day.

Burke has always believed that Unpretentious was above average and was relieved that he finally performed up to expectations at Flemington.

“I think he is definitely the best horse I have had, potential wise anyway,” Burke said.

“I’m hoping to get him in the Newmarket and hopefully he will get in on the minimum. That’s the plan at this stage.”

A win down the Flemington straight last start is one positive heading to the Group 1 $1m Lexus Newmarket Handicap (1200m) at Flemington next March and Burke is looking for further improvement for Unpretentious as the four year old matures over the next couple of months.

“We’ve been waiting for him to mature and he is a lot better horse now mentally and physically and I think he will improve with the Spring break.”

Unpretentious struggled in the Autumn this year and was unplaced from five starts but Burke knew he was better than that and produced the Stratum gelding first up to win at Ballarat early in September before heading to Flemington.

“I was rapt for the horse, just to see him finally do it,” Burke said.

A long association with the Williams family saw Burke contact Craig Williams and the top jockey has set up a good partnership with Unpretentious.

Williams has been aboard Unpretentious at his last three starts including the wins at Ballarat and Flemington and has established a high opinion of the four year old.

“I’ve got a lot of time for Unpretentious. I’m rapt the way Nikki has brought him on this campaign and he’ll have some big targets in the autumn,” Williams said.

“Remember, at his last start he was third emergency. He’s not well in on the weights at the weight-for-age conditions tomorrow but he needs to win to lift his ratings by a few points.”

Unpretentious holds the top spot in betting at $3.40 just in front of Stradbroke Handicap winner Mid Summer Music at $3.80 with Hot Snitzel the next in the market at $5.