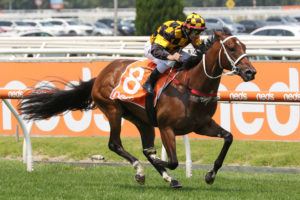 The Trent Busuttin and Natalie Young trained Letzbeglam was sent out as one of the outsiders in the Blue Diamond Prelude for the fillies at $31 but has now firmed dramatically from $101 to $12 in the betting at Ladbrokes.com.au for the Group 1 $1.5m Ned Blue Diamond Stakes (1200m) at Caulfield in a fortnight.

Letzbeglam was coming off a Werribee two year old maiden win on January 21 but the Snitzel filly treated her opposition today as second raters as she went on to record a two and a quarter lengths win over Muntaseera ($3.30) with Geist ($16) doing her best work at the finish to claim third place.

Co-trainer Natalie Young was very impressed with the way Letzbeglaam accelerated in the straight and also praised winning jockey Brett Prebble for a great ride.

“She took a while to change legs down the straight but once she did she found another couple of lengths. The Snitzel came out there in the end,” Young said.

“She will be getting the cotton wool on her now. Great ride by Brett Prebble too.”

“He used his initiative and kept her going forward when she jump so good.”

Letzbeglam was quick to get into stride and Prebble let her settle in the first three which gave her an uninterrupted run once heads were turned for home.

The disappointment of the race was the Peter and Paul Snowden trained Fresh who was sent out as the $2.70 favourite but after racing with the leaders, faded in the straight to finish last in the nine horse Blue Diamond Prelude (F) field.