Kings Will Dream is the 2019 Turnbull Stakes Winner

Kings Will Dream has pulled off an upset victory in the Group 1 Turnbull Stakes (2000m) at Flemington this afternoon. 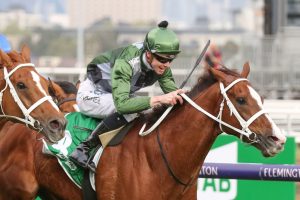 Kings Will Dream was strong to the line in the Turnbull Stakes. Photo: Ultimate Racing Photos

Kings Will Dream was knocking on the door of a Group 1 win from the time he arrived in Australia, but his chances appeared to have passed when he suffered a severe injury in last year’s Cox Plate.

Jye McNeil was extremely patient on the horse; taking a position off the early pace set by Trap For Fools, Kentucky Breeze and Hartnell and enjoying a nice run in transit.

Slowly stoking Kings Will Dream up as the field turned for home, McNeil delivered a gem of a ride to get the horse through the appropriate gaps and was ultimately greeted with a big turn of foot when he asked for an extra effort.

Finche produced another huge effort to challenge in the final 100m, but it was the six-year-old son of Casamento that was first past the post.

Kings Will Dream was McNeil’s first Group 1-winning ride and the hoop was understandably elated after the race.

“It’s been a long time coming and I’ve worked very hard in my entire career so far, so it makes this moment even more special,” he said.

“Because they were behind me (the race favourites) I didn’t know where they were. I was concentrating on Hartnell and trying to find his back because I knew he’s take me right to the hundred.

“I wasn’t able to find that path, but I was able to manoeuvre into the clear. Fantastic job from Chris (Waller) and the team getting this bloke back from injury.”

Stable representative Jo Taylor was on hand for Kings Will Dream’s win in the Turnbull Stakes and revealed that the Cox Plate looks the likely target for horse.

“Obviously in the Cox Plate last year we knew he had a really bad injury, and to ensure the horse not only pulled through, but got back to racing – Chris has managed his return so well,” Taylor said.

“How could we not? (look at the Cox Plate). The blinkers were off and (Jai) rode him a bit more conservative than what we did in his second-up start and timed it to perfection. He was certainly strong.”

Kings Will Dream remains a $21 chance in the 2019 Cox Plate all-in market at Ladbrokes.com.au.