Johnny Get Angry got himself a Group 1 win on Saturday by taking out the $2 million Victoria Derby (2500m) in a win that is sure to go down in Flemington folklore.

Tears flowed from jockey Lachlan King as the young man won his first Group 1 aboard Dennis Pagan’s three-year-old gelding, a special moment for the former two-time AFL Premiership winning coach after choosing to stick with King earlier in the week.

The son of Tavistock was on the short backup after running third in last week’s Group 2 Moonee Valley Vase (2040m), but failed to gain any respect from bookmakers and punters alike jumping at $21 in the market.

King found himself tracking the favourite Young Werther along the fence early on before daylight opened up down the straight for the underdogs to pull clear. 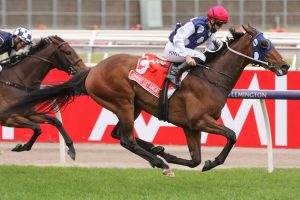 Young Werther and Damien Oliver put in a huge challenge over the final 200m with the pari racing away from the rest of the field, but it was clear the blinkers had done the trick as Johnny Get Angry kicked to win by a length.

“I thought I was going too good, I thought had to wait some more. Dad just said patience, patience, try and bide as much time as you can. I was just going too good and I thought gee I’ve got to time this right because I knew Olly would pull something out. When I let him down he just exploded for me with the blinkers on,” King told racing.com.

“I thought he was half a chance, but I was just really worried about the pace of the race. Slow in the run, I really thought a run was going to come from Cherry Tortoni or someone and just go woosh, wasn’t to be” Pagan said after the race.

“There’s just something special about it, I never in a million years thought it would happen, and he’s done it. You dream about it, that’s all I’m thinking about for the last two months, just getting him here, I just wanted to get him into he Derby and he’s won it.”

Hit The Shot was the other surprise story of the race after beating home Young Werther over the final 200m for second.

The Matthew Cumani-trained colt was well back rounding the turn but still made up a stack of ground working into the clear out wide.

“It was so close, he just went too slow early and it really didn’t play into our hands unfortunately. But you’ve got to be impressed with the way he finished, he’s a serious horse” Cumani said.

The final 2020 Victoria Derby finishing order can be viewed here.