The Chris Waller-trained Kolding appears Cox Plate bound after ticking all the boxes in the Group 2 Hill Stakes (2000m) at Royal Randwick on Saturday.

The five-year-old New Zealand import was a slight query in what was his first run beyond the mile, but showed absolute no trouble handling the trip in a convincing two-length win under James McDonald.

McDonald entered the race in red-hot form after winning the previous three races under Laure Me In, Enthaar and Shaquero.

McDonald, who also combined for his 50th stakes win with Waller, chose to settle off the speed in fourth before rounding the turn out wide.

From there, the five-year-old took the lead at the 250m and eventually kicked clear from the challenging Avilius and Fierce Impact to find the line.

Kolding was having his fourth run back from a spell after claiming his first Group 1 win in the George Main Stakes a fortnight ago over the mile.

After a disappointing first-up run in the Winx Stakes however, punters had every right to feel wary, although it appears Waller was the only that never doubted his chances. 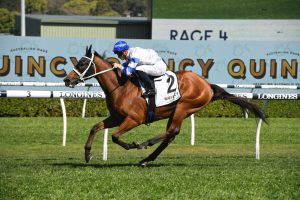 “Everybody has jumped back on board. I was getting lonely,” Waller said after Saturday’s win.

“Nothing is wrong with him. When a horse doesn’t win we check all the pages but we couldn’t find a thing wrong with him. We’ve been justified with a Group One win last start and another good win this time.”

Kolding will now head straight to the Group 1 Ladbrokes Cox Plate (2040m) on October 25 at The Valley as he prepares to step out over further.

Ladbrokes bookmakers have adjusted accordingly to Kolding’s Hill Stakes win, moving him from $67 all the way onto the third line of betting at $19.00.

“He’s just won a half million dollar race and hasn’t affected his preparation. He can still march on to the Cox Plate next start” Waller went on to say .

Ten horses have completed the Hill Stakes – Cox Plate double, with the last being Saintly way back in 1996.

Avilius, who ran on well for second with the blinkers on for the first time, remains a $51 chance in the Cox Plate, while Fierce Impact’s late run has seem him drift from $17 out to $21.