The quick back-up from the Melbourne Cup was not an issue for Magic Wand as she claimed a Group 1 victory in the 2019 Mackinnon Stakes at Flemington on Saturday. 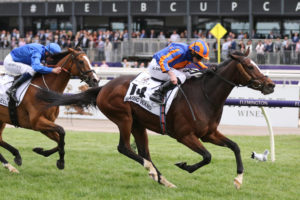 Magic Wand finished a tough tenth in the Melbourne Cup and there were concerns that she would be a touch flat in the Mackinnon Stakes, but that clearly was not the case.

Hartnell hit the front at the 300 metre mark and he was in for the fight, but the class of Magic Wand prevailed late and she ran away from the veteran late, while Melody Belle flashed home in the concluding stages.

Magic Wand’s victory in the Mackinnon Stakes delivered jockey Ryan Moore a double on Stakes Day and he said after the race that the talented mare definitely deserved her maiden Group 1 victory.

“She is a wonderful mare and she had been very unfortunate not to win a Group 1 before today,” Moore said.

“She is just so tough and very courageous.

Aidan O’Brien stable representative TJ Comerford admitted that the stable had taken a risk running Magic Wand in the Mackinnon Stakes following her effort in the Melbourne Cup and he was delighted that the decision had paid dividends.

“She is a very good filly and this is probably the first time that she has gotten her bearings since we got here,” Comerford said.

“We haven’t really gotten quick ground and that is probably the quickest that she has gotten.

“Aidan always said that she was a very good filly and she has been placed in all those Group 1s.

“She ran two miles the other day, she ran in the Cox Plate and now she has won today.

“It was a good piece of work in the Melbourne Cup and she came out of it so well.

“It didn’t work out for her the other day, she had drawn badly.

“We knew she was in good form, we were just worried about the ground because of the rain that we had.

Melody Belle savaged the line in the concluding stages and lost no admirers with another impressive effort at Group 1 level, while Hartnell was his usual gallant self in what was the final start of his racing career.