Toowoomba mare Love You Lucy is looking to keep her Eagle Farm record intact when she lines up in the Listed $125,000 Bright Shadow (1200m) for the Fillies and Mares on Saturday. 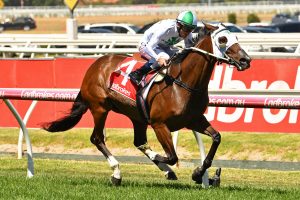 Jamaican Rain, above, is one of the favourites for the Bright Shadow at Eagle Farm. Photo by Ultimate Racing Photos.

“Some horses don’t handle it but she does,” trainer Barry Squair told AAP.

The Dane Ripper Stakes was the biggest training success for Squair and evergreen jockey Glen Colless will team up with the veteran Toowoomba trainer again hoping to keep a 100% winning record on the mare.

Colless took over the reins on Love You Lucy last start from Mark Du Plessis who had been aboard the mare at her two previous starts which included a win three runs back in the Listed $85,000 Silk Stocking (1200m) at the Gold Coast on May 16.

Squair always had a high opinion of Love You Lucy and the Love Conquers All mare hasn’t let him down with eight wins from only nineteen starts.

“She’s been up for a long time but she is a lovely mare,” Squair said.

“I always felt she would be a good winner but she’s won eight races very quickly and that has surprised me.”

Love You Lucy has been handed the equal top weight of 58.5kg under the set weights and penalties conditions of the Bright Shadow and will jump from a middle gate in the fourteen horse field.

Despite claiming the Group 2 Dane Ripper Stakes, Love You Lucy is still at the lucrative odds of $11 at Ladbrokes.com.au while the Richard Laming trained Jamaican Rain and James Cummings’ Multaja share favouritism at $6.

Jamaican Rain is having her first run back since winning the Group 3 $160,000 Summoned Stakes (1500m) at the end of the 2019 Melbourne Spring Carnival and has a very good first up record.

Tegan Harrison has secured the ride on Jamaican Rain who has drawn the pole position.

Multaja has failed to finish in the placings at three runs from a spell but has won an 840m Doomben barrier trial since finishing fifth in the Listed $125,000 Helen Coughlan Stakes (1350m) at Doomben on May 30.

Brad Stewart will be wearing the Godolphin royal blue colours on Multaja who drew barrier nine in the original draw but could move in a gate or two at final scratching time on Saturday morning.