2020 Dane Ripper Stakes Winner Love You Lucy In An Upset

Love You Lucy was the pride of the Darling Downs on Saturday winning the Group 2 $175,000 Dane Ripper Stakes (1400m) at 40/1 for trainer Barry Squair at Eagle Farm. 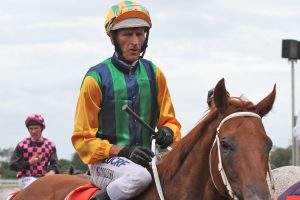 Jockey Glen Colless (pictured in 2014) was back in Group 2 winning form with an upset on Love You Lucy in the 2020 Dane Ripper Stakes. Photo: Daniel Costello.

Two back the striking daughter of Love Conquers All enjoyed a Black-Type victory at the Gold Coast in the Listed Silk Stocking (1200m), but she was forgotten by the punters in tougher company in Brisbane for the Dane Ripper Stakes 2020.

With regular rider Mark Du Plessis engaged on rival Outback Barbie, Squair opted for experienced hoop Glen Colless as the replacement and was not let down by the veteran hoop despite him going to the inside when instructed to keep the mare out wide.

“The big thing I told Glen (Colless) was just to hold her back and not let her go too early, she just over raced slightly the last time out up on the speed and I wanted her to get back and run on,” Squair said.

“Mark Du Plessis rode her at last start but got the ride on Outback Barbie earlier on and stayed on Gollan’s horse for this race, I wanted an experienced jockey to replace him and Glen Colless is just that.”

Squair was always confident his progressive four-year-old mare would run out a strong 1400m and she did just that in the Dane Ripper, getting all the breaks late to charge home in a narrow upset over fellow double-figure hopeful River Racer ($26).

Jumping favourite was Winter Bride ($5) on the quick back-up after her eighth to stablemate Tyzone in last weekend’s Group 1 Stradbroke Handicap (1400m), but she had to settle for third a quarter-length off the winner.

“The barrier blanket got caught in the gates as we were leaving and it pulled my shoe out of one of my irons, luckily I was going back anyway and it didn’t cost us but there was a bit of panic at the start,” winning jockey Colless said.

“Barry wanted her to get to the outside but when I reached the top of the lane the whole field were headed out wide and I just stuck to the rail, I think it was a little chopped up wide given the way they’ve been winning today.

“I couldn’t believe it when I got the call from Barry to ride her, I saw what she did down the Gold Coast a couple of starts ago and fantastic to share this Group 2 with him.”

As for where to next with Love You Lucy, Squair said he would look at the upcoming program but the mare may also ben in need of a well-deserved spell.

“I really don’t know where to go with her next, the owners were over the moon when we won the Silk Stocking, now she’s won a Group 2,” he said.

“She’s been up for a long time now maybe I’ll give her a break but if I see something I like, we might go one more.

“She’s a lovely filly I always thought she would do well but she’s won her eight races so quickly it’s certainly surprised me.

“I dislocated my shoulder riding her before the Silk stocking and my wife told me no more riding at track work, but I might sneak back on when I’m feeling better.”