Wild Ruler extended his unbeaten run at Randwick to four on Saturday with a brave win in the Group 2 Arrowfield Sprint (1200m) between the three-year-olds.

The Snitzel colt was caught three-wide after jumping from an awkward gate, but still had enough left in reserve to kick clear at the 250m mark to eventually see off a late challenge from the fast-finishing Isotope.

The Snowden-trained three-year-old was potted as a $6.00 chance in the field following a complete forgive run last time out in The Galaxy when he struggled to get going on the wet track to finish sixth behind Eduardo.

Prior to that, Wild Ruler won the Listed Fireball Stakes at Randwick over a touch shorter –  a run that gave Paul Snowden plenty of faith heading into Saturday’s start. 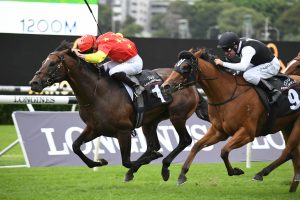 The Snowden’s won the Arrowfield Sprint for a third time at Randwick on Saturday with Wild Ruler. Photo: Steve Hart.

“When he shot clear I sort of sat back and was getting ready to let rip, obviously our filly (Dame Giselle) had done no work and had the perfect run,” Snowden told Channel 7.

“He had to bounce back from a forgivable performance in the Galaxy on paper where he didn’t get things to run his own way, he got buried in the ruck and it was a hard to day to make up ground. We had a lot of faith in him.”

Wild Ruler has now made 10 starts for five wins and is more than likely headed back up to Group 1 level sometime in the near future.

“The team are more than happy to race him on for another extended period, so it’s not do or die at the moment. But he’s well-placed and I’m sure we can get the job done,” Snowden said when asked where the horse would head next.

Isotope, who was having her second run in Sydney following a win in the Listed Darby Munro at Rosehill three weeks ago, did enormously well to charge late for second.

Prague also finished off well for third paying $3.40 the place.