Webb looking for Spring riches with Bliss Street and Yosei 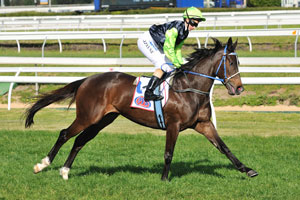 Bliss Street has only recently joined the Webb stable and stepped out for her first public appearance at the Cranbourne trials today and did enough to keep Webb happy.

Webb’s Group 1 winner Yosei also fronted at the trials and the pair did what was expected and finished midfield over 800m.

Bliss Street ridden by Glen Boss and Yosei ridden by Michelle Payne were given an easy time and Webb will give each another trial before kicking off their Spring campaign.

“Both had easy trials and finished midfield. Both jockeys came back with a good report,” Webb said.

“I am happy with where they are at the moment.”

Bliss Street was previously prepared by top Western Australian trainer Daniel Morton before Yarraman Park Stud and a group of owners pair $450,000 for the Flying Spur three year old in the select session of the Magic Millions National Broodmare Sale at the Gold Coast in May.

But perhaps one of her best efforts came when second to super filly Mosheen in the Group 2 $250,000 Tabcorp Edward Manifold Stakes (1600m) at Flemington on October 2 when trained by Morton.

Webb will stick to the mares’ Group races in the early part of the Spring before mapping out a late Spring plan .

“They both will kick off in their Spring with Group 2 or 3 races for mares,” Webb said.

Top Victorian female jockey Michelle Payne only got her clearance last week to commence riding trackwork again after recovering from injuries she received in a fall at Donald in May and is glad to be back doing what she loves.

“At the moment I still love riding, although at the same time I don’t want to push my luck,” Payne said.

Payne came through her first morning back at the track last Friday okay and fronted up to the trials today to ride her favourite Yosei for Webb and also Boom Baby Boom for her brother Patrick.

“Michelle rode Yosei and has ridden her in a couple of gallops. She said her weight was okay and she also had a trial for her brother Patrick,” Webb said.

Payne is iching to be reunited with Yosei after the pair combined to win three Group 1s, the first of which was the 2010 $300,000 Inglis Sires’ Produce Stakes (1400m) at Randwick.