Sydney Cup Up Next for Chairman’s Quality Winner Quick Thinker

The Murray Baker and Andrew Forsman-trained Quick Thinker returned to the winner’s circle at Randwick on Saturday with a brilliant staying performance to take out the Group 2 Chairman’s Quality (2600m).

The So You Think entire claimed his first Group 1 on Day 1 of The Championships last year by a nose to Zebrowksi in the ATC Derby, but he failed to return the same horse during the spring running no better than fifth in two starts in Melbourne.

With three runs under his belt and some fitness on his side, the four-year-old relished racing with some sting out of the track as Damian Lane timed his run to perfection down the straight.

The champion hoop chose to push forward rounding the turn after settling midfield before bursting clear out wide to race past Paths Of Glory and fend off a late challenge from the fast-finishing Rondinelli.

Forsman said after the race that his horse was always worth forgiving on his disappointing spring, although he admits he didn’t think the track was to his liking on Saturday.

“I didn’t think the track would be wet enough, but it looked a real slog out there and you could see he came into his own, he was still on the bridle and a lot of them were under the pump,” Forsman told Channel 7.

“Melbourne just didn’t work out. The tracks were quite firm there and it just wasn’t his go. We just knew that if we got him in good order and if we got track conditions to suit then he should be competitive.”

The Chairman’s Quality has proven an ideal lead-up race heading into the Group 1 Sydney Cup (3200m) back at Randwick a fortnight later. 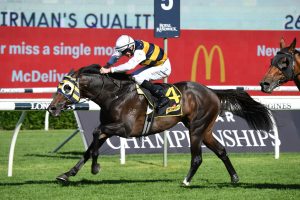 Six horses have completed the Chairman’s – Sydney Cup double, with the most recent being No Wine No Song back in 2008.

“Have to now that’ll definitely be the plan, that was the plan all the way through” Forsman said when asked on whether the stable would target the $2 million feature on April 17.

Quick Thinker has firmed from $51 into $15 in Ladbrokes’ All-In Sydney Cup market, while second place-getter Rondinella has also trimmed into $17.00.