Streets Of Avalon returned to the winner’s circle at Caulfield on Saturday by claiming the Group 3 Moonga Stakes (1400m) with Ben Melham on board.

Trained by Shane Nichols, the five-year-old gelding by Magnus lifted at the 300m mark to challenge the leading Tom Melbourne on the outside. Melham looked a little exposed early in the race sitting up on the speed but still managed to find the line nicely from the middle of the track.

“It was a good win. He’s a really honest horse probably a little bit underrated I think” Melham said after Saturday’s win. 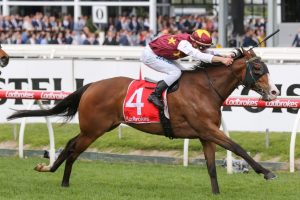 “He’s ran in all the Group 1’s, never runs a bad race, he’s not overly big. He carries a lot of weight in him but under these conditions today he got a beautiful run outside the leader. He tries his bloody guts out going to the line, he got challenged halfway up and he could’ve given up but he didn’t, so good win.”

Streets Of Avalon returned to the races back in August where he ran fifth in the Group 3 The Heath (1100m) at Caulfield. A disappointing run in the Bobbie Lewis followed before an encouraging fourth in the Group 1 Sir Rupert Clarke Stakes (1400m), right before Streets of Avalon failed to run a place in the Toorak Handicap (1600m) at fortnight ago.

Despite not seeing out the trip in the Toorak, Nichols still has big things in mind for the horse. The winning trainer said after the race that a trip to the UAB could be on the cards following one or two more starts this Spring.

“There’s a 1400m on the last day, I don’t think we’ll tackle the Cantala or anything like that. We’ll go to the Group 3 14 on the final day, and he might even back up seven days after that in a race at Sandown” Nichols said when asked on what’s next this Spring.

“We were sort of talking about a spread of races in Dubai for him early next year. His rating might have gone up by then so it might make it a little bit tricky, but we have got that in the back our mind as well.”