The Shane Nichols-trained Streets Of Avalon looks potential value in Saturday’s Group 1 $500,000 Futurity Stakes (1400m) as he looks to successfully defend his title in the Blue Diamond Stakes Day feature. 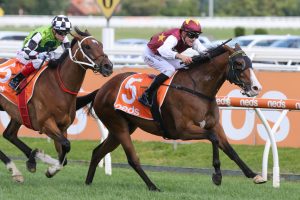 Twelve months ago, the Magnus gelding saluted at double-figures third-up in the Futurity Stakes and he comes into the race in even better form this Melbourne Autumn Racing Carnival.

First-up at The Valley the six-year-old was dominant in the Group 2 Australia Stakes (1200m) before backing-up at Caulfield at the start of the month to take out the Group 1 CF Orr Stakes (1400m).

He returns to that same track and distance with jockey Zac Spain continuing associations for the Futurity Stakes on Saturday, and is the forgotten horse in betting at Ladbrokes.com.au paying $11 in a star-studded field.

Jumping from barrier seven and with that great record over 1400m at Caulfield, it’s a price only explained by the presence of so many other top performers including the $3.20 favourite Behemoth.

The David Jolly-trained All Too Hard five-year-old Behemoth is also a dual Group 1 winner at the track and distance having completed the Memsie Stakes – Sir Rupert Clarke double in the spring before returning a first-up Morphettville winner by three lengths late last month.

Still, Nichols is confident in last year’s champion and believes Streets Of Avalon is overs looking for back-to-back wins in the race for the first time since Niconero (2008-09).

“Tell me in what other year would you find the winner of the Australia Stakes and the Orr Stakes at $12 in the Futurity Stakes? It seems over the odds to me as I think he’s a great each-way chance,” Nichols said to Mediality Racing this week.

“He’s in great form. He loves the Caulfield 1400 metres and he hasn’t gone backwards since his Orr Stakes win.

“I was as confident as I’ve ever been going into the Orr Stakes and he’s in the same shape to replicate that success. He’s capable of doing it. He hasn’t gone backwards.”

There may only be ten final acceptors in this season’s Futurity Stakes field, but so high is the quality of runners that a further three are at single-figures in the latest markets to win.

Alizee (2019) was the last Futurity Stakes winning mare and there’s money on Savabeel four-year-old Probabeel to be the next.

A winner of nine of her 20 starts including Sydney’s Group 1 Epsom Handicap (1600m) last October, she made her Caulfield debut first-up on February 6 winning the Group 3 Geoffrey Bellmaine Stakes (1200m).

The Futurity Stakes is set to run as Caulfield Race 6 at 3:35pm (AEDT) on Saturday’s race card and offers the winner a golden ticket into the $5 million The All-Star Mile (1600m) run this year at The Valley on March 13.