Stampede Rolls His Rivals En Route to The Metropolitan

The step up to the mile and a half proved no worries for Stampede at Rosehill on Saturday as Gai Waterhouse and Adrian Bott’s classy seven-year-old led from barrier to box to claim the Group 3 Colin Stephen Quality (2400m).

Stampede got away quick from the outside to dictate from the front with jockey Adam Hyeronimus in the saddle. The pair set up shop in front of race-favourite Dabiyr before kicking away down the straight to win comfortably by a length. 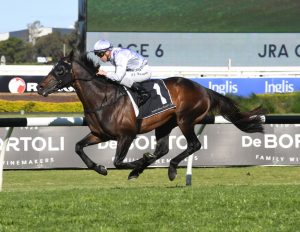 Stampede looks to back up for the third week in a row in the Group 1 The Metropolitan at Randwick next Saturday. Photo Credit: Steve Hart.

Stampede was up in trip on Saturday backing up from a second placing in last weeks Group 3 Kingston Town Stakes (2000m) behind Finche.

After opening at $4.60, Stampede’s win on Saturday marked Waterhouse’s fifth win in the Colin Stephen Quality over the last 20-years, leaving the stable with some big decisions to make ahead of next week’s Group 1 The Metropolitan (2400m) at Randwick.

Waterhouse has won eight Metropolitan’s with the most recent being Glencadam Gold in 2012.

Adrian Bott said backing up three weeks in a row mightn’t be ideal, but with the horse in fantastic form, it’s certainly something worth considering.

“We’ll leave that open without committing to it just yet, it would mean going three weeks in a row but when he’s racing like that it’s hard to ignore it” Bott said.

Hyeronimus shared a similar thought after the race, and admits he had some doubts heading into Saturday’s start.

“Such a pleasant horse to ride, it was good to see him get the job done today. Especially over the 2400m, I had my doubts. I spoke to Gai and Adrian through the week because I did have my doubts, but that’s what Gai does best, proves everyone wrong and she’s the master, so it worked out well” Hyeronimus said.

Twenty-one horses have completed the Colin Stephen-Metropolitan double, with the latest being Railings in 2005.

Master of Arts also saw out the trip well for second. There was no such luck for Dabiyr though, who struggled to find space down the straight finishing in fourth.