Three-year-old filly Anaheed returned to the races in style on Saturday to claim the Group 2 Rubiton Stakes (1100m) at Caulfield.

After placing third in the Group 1 Manikato Stakes last Spring at Moonee Valley, the Fastnet Rock filly added a third Group 2 victory to her resume thanks to another stunning ride from jockey Tim Clark. 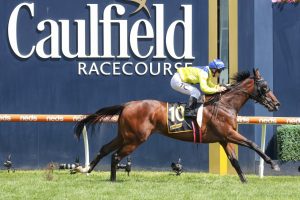 Plenty of late money came for Anaheed, who went around as the $2.90 favourite first up. Clark got away from barrier 7 cleanly, before settling just off the pace behind the leading Sartorial Splendor.

The pair made a move at the 200m mark to join the leader. Clark stayed patient in the saddle before pushing the button down the straight to win comfortably by a length.

Trainer Peter Snowden said after the race that his horse wasn’t fully 100% fit, but that the win was an encouraging sign ahead of the Group 1 Oakleigh Plate (1100m) back at Caulfield in a fortnights time.

“She has been tremendous for us. You’re not very often going to get fillies that are good at two and come on again at three, and she’s done that” Snowden said.

“I was surprised at how well she won. She’s coming off one trial and a fairly soft trail at that. Being an older filly too I can see a bit of condition now and I can see she’s maybe not quite as forward as I hoped she might be. She showed a real class today and she’s probably only 90% there and she still won, so I’m really happy with that effort.”

Anaheed became the fourth three-year-old to win the Rubiton Stakes and the first winner for team Snowden. She has been $14.00 into $6.00 favouritism for the Oakleigh Plate, while second place-getter Bold Star also gained ran an eye-catching second to firm into a $17.00 shot.