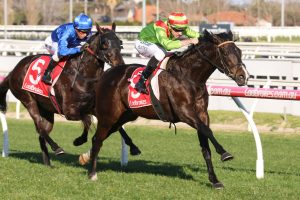 That included his last start win in a BM64 over 1440m at Caulfield on June 1 by a huge five lengths as the odds-on favourite.

The punters were onside again for his first-up victory in tougher grade when returning to Caulfield Racecourse in the Regal Roller Stakes, Begood Toya Mother looking to prove his spring potential in his first stakes race.

With regular rider Declan Bates in the saddle again, the lightly-raced galloper did not disappoint, saluting for the favourite backers with an impressive win in the handicap clash.

“It’s more of a relief than anything,” Bowman said after the race. “You come out of the winter with all this hype and you’ve got to keep a lid on it.

“He put the sword to them today and they couldn’t keep up.

“It’s a good race to win, good horses win it, you’ve only got to look back on the honour role.”

Posting his sixth win on the trot, Begood Toya Mother hit the front early and looked very comfortable controlling the pace of the race in the lead.

He rolled around the turn, travelling beautifully and in the end did it easy despite a challenge from Haunted about 200m out.

Godolphin had won the last two races back-to-back with victory in the Vain and Quezette Stakes, but and their Regal Roller runner Haunted looked to make it a three-peat getting up on the inside of the favourite late.

Begood Toya Mother however gave a nice kick, found another gear and pinned his ears back to charge to the line breaking his Black-Type maiden status.

The first three in running throughout were the first three over the line in the trifecta in the end too with Lindsay Park’s Not A Single Doubt mare Fundamentalist, a multiple Group 1 runner-up in Sydney during the autumn, finishing third.

“We’ll probably see how he pulls up and run either in a fortnight or three weeks and then it’s into the Sir Rupert Clark,” he said.