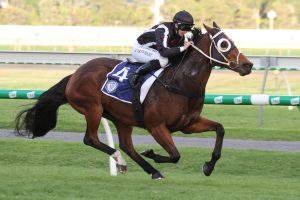 Mudlark Jungle Edge (pictured at Morphettville) took his career earnings up over $1.7 million with a win in the 2020 Sir John Monash Stakes. Photo: Jenny Barnes.

Mick Bell’s stable ace had career start number 82 in the Sir John Monash Stakes, the rising 10-year-old backed into $2.60 favouritism by the jump with Caulfield downgraded to a Heavy (8) before the jump.

Recent winner of the Group 3 D C McKay Stakes (1100m) over the distance at Morphettville in May, Jungle Edge came off a lead-up run in Sydney to return to the winners’ stall in Melbourne with conditions to suit.

Relishing the going, the popular warhorse was given the perfect ride by jockey Jade Darose who made history as the first female winning rider of the Sir John Monash Stakes this century.

Jungle Edge travelled sweetly throughout settled second behind the pacemaker Tavisan before coming around the turn onto the straight mid-track and hitting the front.

The James Cummings-trained Winter Dash winner and one-time favourite Viridine ($3.10) was on his heels and chasing, but couldn’t run down the always-honest Jungle Edge who came away for a three-quarter length win.

It was his 19th career success and eighth on Heavy going, the Sir John Monash Stakes results taking Jungle Edge’s earnings up over $1.7 million in stakes.

The trifecta was rounded out by the Paul Preusker-trained I Am Someone ($8.50) who crossed just over two lengths off the winner in third.