No Plan Ahead for Atlantic Jewel Winner Exhilarates

September 7, 2019 by Ryan Cook
Home > No Plan Ahead for Atlantic Jewel Winner Exhilarates

The short-priced favourite opened at $1.90 with Ladbrokes prior to the jump, and after settling on speed, raced home comfortably to win by half a length.

It was an uncharacteristic run from Exhilarates, who normally looks to settle back in the field.

Jockey Craig Williams earned the ride this time around after Kerrin McEvoy rode Exhilarates to a victory in last fortnights Group 3 Quizette Stakes (1100m) at Caulfield, and with plenty of questions surrounding distance and a suitable race target later in the Spring, Williams said he was happy to be on speed early.

“That’s why you found me at the front early because there’s not much pressure, everyone wants to be able to be stalking rather than making it all, so that race was a bit different at the early stages, but luckily for me I’m on the best horse. She’s well placed and extremely well-weighted today and she’s just a little dynamo, she’s great.”

Exhilarates has now won four races over 1200m or less, including the Magic Millions 2yo Classic earlier in January. 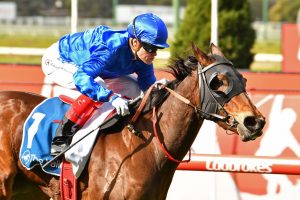 A step up in trip looks to be on the horizon, although Williams admits Exhilarates was a little keen early with the blinkers on.

Godolphin representative Sean Keogh also spoke on behalf of trainer James Cummings but shed little light on where the stable plans to head next.

“We’re just delighted to have this filly back and she’s been great all prep. She’s off the back of two black-type races now so we’ll get her home and plan out from there” Keogh said.

Sassy Salitage also raced home strongly with Ben Allen on board to finish second in just her third career start.