The Trent Busuttin and Natalie Young team now have their sights set firmly on this year’s Victoria Derby following Albarado’s win in the Group 3 Neds Stakes (2000m) at Caulfield on Saturday.

A competitive field of three-year-old’s lined up eyeing a spot in the $2 million feature race at Flemington on October 31st, only to be trumped by Mark Zahra, who scored himself an early double on Caulfield Cup Day.

The winning hoop found himself in a tricky four-wide position out of the gates, which turned into an advantage rounding the final turn as the Savabeel colt beat home a wall of horses charging the line over the final 50m.

Albarado won on debut at Ballarat back in May over the 1200m but was bred to appreciate racing over further as he progressed in his career. 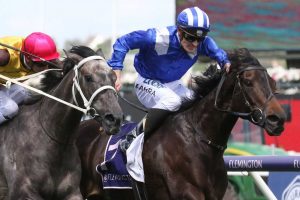 The New Zealand import put in a bold performance for third in the Listed Super Impose Stakes at Flemington a fortnight ago over 1800m, but did look a slight fitness query in his first assignment over the 2000m.

“He jumped well, I just wanted to have him back, turned and switched off and have him strong late, and to to have him really relaxed” Zahra told racing.com following the race.

“When I got him to switch off I just had him go through his gears. He’s green and when I hit the front at the 200m he was looking around, but Mick Price’s horse came and challenged him and he found.”

The stable chose to race with the blinkers on last month, a decision that Zahra thought made the difference on Saturday.

“I think with the blinkers, when he seen the horse coming on the outside he actually dug in. At the furlong there it could have gone either way, he could have turned up, but credit to him, he’s a fit horse, well-trained and got the job done” Zahra went on to say.

Ladbrokes bookmakers have acted accordingly to Albarado’s impressive win, trimming his Victoria Derby quote from $21 into $10 in the All-In market.

Trent Busuttin often has his horses in peak condition at this point in the Spring, while he also knows a thing or two about winning the Derby having won one back in 2011 with Sangster.

“I think so, he was our first good horse and we came out of this race where he took off and got nutted at the line. Same colours, most of the owners in Sangster in this horse, so yeah, first good horse got us started and hopefully this horse can replicate in a couple of weeks” Busuttin said when asked to compare the two.

Let’s Karaka Deel certainly lost no admirers finishing second after racing up on the speed, while Redwood Shadow, who actually looked the winner at one point, put in a good effort for fourth.