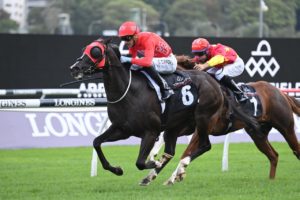 Arrowfield 3YO Sprint winner Mazu is favourite to beat the older sprinters in Brisbane’s 2022 Doomben 10,000 at Eagle Farm on Saturday. Photo: Steve Hart.

The progressive Maurice gelding has stamped himself as a young horse to watch stringing together five consecutive wins, four this prep, ahead of his acid test at weight-for-age in Brisbane on Saturday.

A class line-up does battle in this year’s Doomben 10,000 field with the opening Group 1 of the Brisbane Winter Racing Carnival to run at Eagle Farm following a change of venue.

The decision to transfer the Doomben 10,000 meeting from Doomben to Eagle Farm was made after continued heavy rainfall across south east Queensland and the latter track’s ability to better handle the conditions.

The wet track is set to suit The Everest-bound Mazu who is three-from-three on Heavy going including his impressive last start Group 2 Arrowfield 3YO Sprint (1200m) win on a Heavy (10) at Randwick on Day 2 of The Championships.

With 35 days between runs, the emerging star has been kept fit with a subsequent Sydney barrier trial on May 2 and he will jump from a favourable mid-field barrier eight draw with Sam Clipperton retaining the ride in the Group 1.

The danger occupying the second line of betting is the James Cummings-trained Kementari, the seven-year-old last seen winning the Group 3 Hall Mark Stakes (1200m) first-up in Sydney on April 16.

The early Doomben 10,000 market mover well-backed since the change of venue from $14 into $9 is the Robert & Luke Price-trained Count De Rupee.

The Gong champ from the spring returned to winning form last time out claiming the Group 2 Victory Stakes (1200m) at this track and distance, and jumps from a good gate five draw with Brock Ryan aboard chasing the double on the weekend.

Co-trainer Luke Price confirmed that Eagle Farm was the stable’s preferred venue for Count De Rupee earlier in the week prior to the official announcement.

“I would prefer it to be at Eagle Farm for sure,” he told Racenet.

“He won really well there last start and I think he would prefer it there.”

Price, who chases a maiden Group 1 victory in partnership with his father Rob, said that success from Count De Rupee on Saturday would also open up the potential for a slot in October’s $15 million The Everest for the horse.

“If we can measure up to Mazu, then we will certainly earn ourselves a ticket in The Everest, I believe.

“We have drawn a lovely barrier, we map well, there is good speed around us. It’s a big, roomy straight at Eagle Farm. I’m really looking forward to it.

“We haven’t won a Group 1 yet, but it is certainly on the to-do list.

“We haven’t had a heap of Group 1 runners, so I think it’s our first really genuine chance of winning a Group 1.”