Gold Coast horseman Bryan Guy is likely to head across the border with his in-form mare Protest this Thursday for a shot at the Listed $160,000 Grafton Cup (2350m) over a Doomben run on Wednesday closer to home. 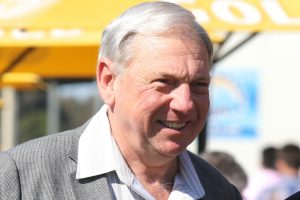 Smart Missile four-year-old Protest is a dual acceptor this week.

The bay is in the field for the sixth at Doomben tomorrow, a 0 – 65 Handicap over 2200m, as well as one of the premier Country Cups in New South Wales – the 2019 Grafton Cup on Thursday.

Protest has been in steadily improving form this campaign with her latest start on June 29 producing a one length win in a Class 3 over 1800m at her home Gold Coast track.

That victory, the third over a 21-start career to date, was on a Heavy (10) track and there is no doubt the bottomless conditions helped her cause.

While yet to win over further than 2100m, Guy is leaning towards a distance test at Grafton over the 2350m as opposed to the shorter-distanced Brisbane race the day prior.

Guy trains in partnership with his son Daniel – their biggest success being in the 2016 Queensland Derby with Eagle Way – and the duo are keen to give Protest a chance at Black-Type glory in the Grafton Cup.

Should she contest the Cup it will be her first stakes assignment since her 10th to Youngstar in last year’s Group 1 Queensland Oaks (2200m) when around seven lengths beaten as a triple-figure roughie.

Her only other Black-Type start was in that season’s Listed Princess Stakes (1600m) at the Sunshine Coast when she finished one length back for fourth behind Improvise.

Guy believes that Protest certainly has the class to be competitive in these types of races and puts her lack of bigger career wins down to her being hard to place distance-wise.

“Every time she has got to distances past 2000 metres, she has been competitive,” he told AAP.

“Even as a three-year-old she ran a great race in the Oaks at Doomben over 2200 metres when she was tenth after being asked to make a long run very deep on the track.

“To finish as close as she did in the Oaks confirmed what we thought of her.

“When she got to 1800 metres last time, she really revelled on the Heavy 10 track and a wet track could be a key to where she goes on Wednesday.”

Doomben is currently rated a Heavy (8), while at Grafton conditions have firmed over the past day or so and the track is now at a Soft (7).

Grafton Cup betting at Ladbrokes.com.au has Protest installed at $26 with Jason Taylor down to ride the mare from barrier 13 of 14.

The favourite at $3.20 is last-start Caloundra Cup winning mare Igraine.