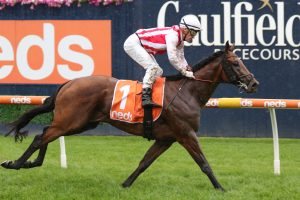 With Alligator Blood taking out the Gold Coast’s $2 million Magic Millions 3YO Guineas last month and now the first-up win of Super Seth, the Caulfield Guineas form from last spring is certainly starting to stack up.

Super Seth reunited with Mark Zahra who had the colt in the box-seat third as the Chris Bieg-trained Free Of Debt led the field around in the Manfred on Chairman’s Stakes Day.

Third to Lyre in last year’s Group 1 Blue Diamond Stakes, Free Of Debt was out to atone for his last start 16th when failing to beat home any of his rivals in the Group 1 Golden Slipper Stakes (1200m) back in the autumn of 2019.

That was run on a Heavy (8) and the Unencumbered colt was a $17 roughie to handle a Soft Caulfield track in the Manfred.

He was brave in defeat however, the frontrunner holding to finish one and a quarter-lengths second to Super Seth who gave a great sprint over the final furlong to charge home for the win.

“He knows where the finishing post is, he certainly likes to win,” Zahra said after the race.

“Obviously with colts when they come back, you never know what to expect but he’s come back bigger and better.”

In a close third to round out the Manfred Stakes trifecta was the beaten favourite Dalasan ($2) for Leon Macdoanld & Andrew Gluyas.

Flemington’s Group 3 $160,000 CS Hayes Stakes (1400m) on February 15 is next-up for Super Seth ahead of his rematch with Alligator Blood a fortnight later back at HQ in the Group 1 $1 million Kennedy Australian Guineas (1600m).

“It was an impressive performance,” Freedman said.

“I wasn’t sure about the ground…it opens up possibilities for Sydney if they get rain up there.

“There’s so many nice races up to a mile so there’s no necessity to go further.”