Keen Array Back To His Best In Gilgai Stakes

October 7, 2017 by Thomas Hackett
Home > Keen Array Back To His Best In Gilgai Stakes

Keen Array returned to winning form with a tough victory in the 2017 Gilgai Stakes at Flemington this afternoon. 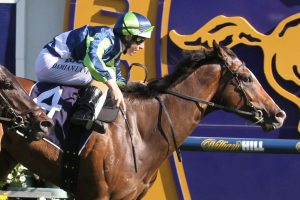 Mark Zahra took up the running on Keen Array in the early stages of the Gilgai Stakes and that proved to be a winning move as no horse was able to make up ground in the concluding stages of the race.

Keen Array clearly got tired in the final 50 metres of the Gilgai Stakes and Sold For Song and Malibu Style both dove at him late, but the Lindsay Park-trained sprinter was able to hold on to record a Group 2 win.

Jockey Mark Zahra admitted after the race that Keen Array got very tired in the final stages of the Gilgai Stakes and he was unsure whether he had held on.

“He is a very hard horse to ride out and it is lucky that he has a big head and he put it out at the right time,” Zahra said.

“They were going too slow for him early and I ended up taking it over just to find his action and find his rhythm.

“I wanted to pinch a gap on him and it worked out today.

“I was stopping that quick I wasn’t too sure, but I hoped he had hung on.”

Keen Array had not recorded a win since he took out the Caulfield Village Stakes almost a year ago and co-trainer Tom Dabernig was delighted to see him return to winning form.

Dabernig said that there is no firm plan with Keen Array this campaign, but he could return to Group 1 company for the first time since he finished eighth in the Winterbottom Stakes in November last year.

“It has just taken a little bit to get him fit,” Dabernig said.

“He had a long time off and last start at Caulfield we were a little bit disappointed.

“Today he sat forward, controlled the race, gave a good kick and they couldn’t get past him.

“He has always been a good talent and it is great to see him return to winning form.

“It is a good time of year to have him in form and this opens up plenty of options for him.

It was all about Spieth and The Quarterback in the lead-up to the Gilgai Stakes, but they were never able to get into the race and both missed the placings.