The punters are taking on the hot favourite Mystic Journey first-up today at Caulfield and coming for evergreen veteran Hartnell to win the Group 2 $200,000 P.B. Lawrence Stakes (1400m). 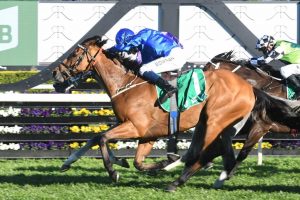 Adam Trinder’s returning Australian Guineas – All Star-Mile double winning filly Mystic Journey has eased out from $1.85 to $2.25 through Ladbrokes.com.au to kick-off her spring with a win in the weight-for-age P.B. Lawrence Stakes.

The now four-year-old daughter of Needs Further has looked a treat in two recent trials at home in Tasmanian and is ticking all the boxes ahead of her fresh run where she chases a seventh straight win.

Still, her trainer Trinder is keeping a lid on his excitement levels, saying the main spring aim was obviously the Group 1 $5 million Ladbrokes Cox Plate (2040m) at The Valley on October 26.

Those backing Hartnell then could be onto a good thing, the Godolphin-raced nine-year-old having his third run in the race after a 2017 win and second to Showtime last season.

A triple Group 1 champion and regular Winx whipping boy, Hartnell is a genuine elite level star and after opening at $5.50 has firmed right into $3.80 in the latest P.B. Lawrence Stakes betting markets.

Bowman was on Hartnell for the star import’s latest victory in the 2018 Group 1 Epsom Handicap (1600m) and also rode him more recently when third in the Group 1 Doncaster Mile (1600m) this April.

“His win in the Epsom [last year] in track record time was one of the most memorable I have had,” Bowman told The Age.

“He just keeps turning up every year. Ever since he has been here [in Australia] he has been a great horse. You know what you are going to get.”

Hartnell only has to run in the first four to take his career earnings up over $7 million, a feat only achieved by 10 before him: Winx, Redzel, Makybe Diva, Sunline, Northerly, Chautauqua, So You Think, Black Caviar, Buffering and Criterion.