Rising star Love Tap has consolidated his position at the top of the Spring Champion Stakes betting with an all the way win in the Group 3 $200,000 Precise Air Gloaming Stakes (1800m) at Rosehill today. 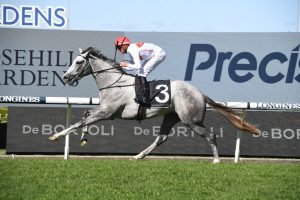 Love Tap, above, was an all the way winner in the Gloaming Stakes at Rosehill. Photo by Steve Hart.

The Richard and Michael Freedman trained Love Tap was the $3.40 top pick for the Group 1 $1m Spring Champion Stakes (2000m) at Randwick on October 10 before today’s win and has now firmed into a clear cut $2.70 favourite.

Nash Rawiller took the Gloaming Stakes odds on favourite Love Tap ($1.70) straight to the front from the jump and dictated the race under his own terms from then.

Love Tap still held the front on the home turn and was strong in the run to the line to record his fourth win from as many starts with a 1.8 lengths victory.

The runner’s up spot was keenly contested with Street Dancer ($17) getting the nod over Bucharest ($9) and Favreau ($31).

Love Tap was having his first run on the city tracks after a win at Nowra and two wins at Goulburn, and the grey really showed last start that he was up to Saturday class with a 4.35 lengths win in a Class 2 Handicap.

Co-trainer Richard Freedman was surprised that Rawiller took up the running on Love Tap but was very happy with the results and he is now set to step up in distance again to the 2000m of the Spring Champion Stakes in a fortnight.

“Let’s hope he goes just like that. Or even better. That is the plan,” Richard Freedman said.

“I didn’t expect Nash to lead. I said to Nash don’t let the leaders get too far away. He kind of took that a bit literally. I was happy to see him out there. They would have to run some good sectionals to run over him. He only does what he has to. He is a pretty relaxed track worker and a pretty relaxed horse generally. That is job done. He’s building.”

“He’s willing. He wants to do the right thing. It is good that he is versatile. He won his second race from back in the field and his last two from on top of the pace. He’s pretty versatile and on the way up. I’m glad we have him and he’ll be a better horse in 12 months.”