In an open market on Saturday’s Group 1 $600,000 Coolmore Classic (1500m) it is the Surround Stakes winning filly Forbidden Love tipped as the one to beat in the Rosehill Gardens feature. 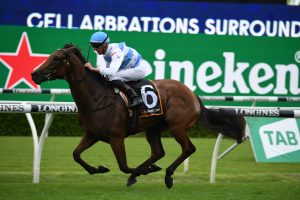 Richard & Michael Freedman’s in-form daughter of All Too Hard took her record up to five wins from 11 starts with her three-length victory in Randwick’s Group 1 Surround Stakes (1400m) a fortnight ago.

She now heads to Rosehill for the Coolmore Classic taking on the older mares in elite company for the second time following her eye-catching third at Flemington when only a half-length off the winner in the spring’s Group 1 Empire Rose Stakes (1600m).

The latest Coolmore Classic betting markets at Ladbrokes.com.au have her installed at $6 to do so and she is drawn to get an ideal run from barrier three in the bumper 18-starter field.

The bookies are tipping the Archie Alexander-trained Chaillot as the danger at $7.50, the Testa Rossa four-year-old coming off a lead-up win in the Group 3 Tressady Stakes (1400m) at February.

She was brave from barrier 13 carrying 56kg first-up there and presents fit second-up in Sydney on Saturday.

Like Forbidden Love, Chaillot put in a big effort in the Empire Rose on VRC Derby Day when fourth under a length beaten and she is out to make her mark having her first run outside of Melbourne on the weekend.

Drawn wide again in barrier 13, the mare will relish coming right back in weight and should be flying with 52.5kg on her back and all the upside going into the Group 1.

The only runner under double-figures in the current Coolmore Classic odds at $9 is the super-consistent Brad Widdup-trained Icebath in gate six with Kerrin McEvoy to ride.

Sacred Falls four-year-old Icebath was runner-up to Colette out of the strong form line of the $7.5 million Golden Eagle at this course and distance last October when excellent on a Heavy (9) track.

She has had two Sydney leads-ups ahead of the Coolmore Classic when third in both the Group 3 Triscay Stakes and Group 2 Guy Walter Stakes at Randwick in February.

Any rain before jump would be to her advantage, however she still looks a genuine chance at another top three performance.

Vancouver filly Vangelic carries the 50kg lightweight in the event from barrier five with Kathy O’Hara taking over for Tim Clark in the saddle.

The three-year-old has plenty of form around some nice types including her Group 1 Flight Stakes (1600m) third behind subsequent Spring Champion Stakes winner Montefilia at a mile last October.

She was the distant runner-up to Forbidden Love in the Surround Stakes at big odds and looks an underrated chance again here at $12 through Ladbrokes.com.au.

She can now surpass the record on Saturday should Vangelic turn the tables on Forbidden Love, which Waterhouse is confident can happen.

“This is a race I love, a 1500m test for the fillies and mares,” Waterhouse told Racenet this week.

“In horse terms, you have the young girls up against the older girls – it’s magical.

“But the fillies are very well-weighted in this race, I’ve had huge success with them and Vangelic fits that mould.

“Vangelic has raced against the best two and three-year-old fillies around and always run competitively.

“I thought her effort in the Surround Stakes was so good she should be given her chance in the Coolmore.

“The beauty of this filly is she handles all track conditions, she has drawn the right barrier and she has a lightweight.”