Chris Waller capped off a huge day at Randwick on Saturday as six-year-old gelding Finche claimed the Group 3 Kingston Town Stakes on the way to this year’s Melbourne Cup.

After winning the Bill Ritchie Handicap with Kolding three races prior, Finche lapped up the wet conditions in Sydney showcasing an explosive turn of foot over the final 100m to nab a narrow win over Stampede.

Everything went perfectly down the straight for jockey Kerrin McEvoy as a clear path opened up on the final turn. Stampede, who led from the barriers, also did well to finish second.

Named after a horse that won three Cox Plate’s, the Kingston Town is the ideal leadup race into Spring’s most time-honoured races. 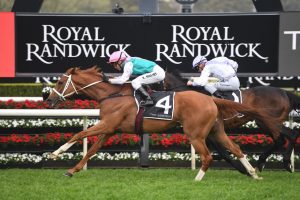 Finche has firmed from $50 into $16 favouritism with Ladbrokes ahead of this year’s Melbourne Cup on November 5. Photo Credit: Steve Hart.

Finche has already firmed into co-favouritism with last year’s Melbourne Cup winner Cross Counter and Marmelo at $16.00 ahead of the race that stops a nation.

In typical Waller fashion, the champion trainer couldn’t say for sure whether Finche would line up in the Cup, but he admits Finche’s win is pointing him in that direction.

“It’s a little closer after today. We’ll have to go home and map out a suitable plan. He’s a very talented horse. We look forward to getting him there” Waller said when asked on the prospect of the Melbourne Cup.

McEvoy, who Avilius to victory for Godolphin in the Group 1 George Main Stakes, also thinks the stable should consider Finche for the famous race on November 5.

“I’m sure Chris is eyeing off the big race in November again and it’s nice to get him winning here and it will be good to see how he can progress from here” McEvoy said.

There was no such luck for the Waller-trained Come Play With Me though, as the race-favourite struggled in the sticky conditions to run sixth.