The Everest Next for Sunlight Following Gilgai Stakes Triumph

Sunlight has completed an ideal lead-in to The Everest by holding on to win the Group 2 Gilagai Stakes at HQ this afternoon. 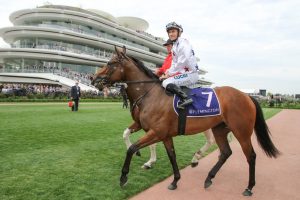 Sunlight was too good for her rivals in the Gilgai Stakes. Photo: Ultimate Racing Photos

The Zoustar mare was blocked for a run before mustering an eye-catching turn of foot to finish third in the Group 1 Moir last week, and she attracted huge interest in Gilgai Stakes betting this week in the wake.

Jumping from the gates well, Luke Currie allowed Sunlight to stride forward and take up the running alongside West Australian Vital Silver; setting a fair tempo in transit for the classy field of eleven.

She was allowed to go through her gears until the 300m when Currie went for the whip, and she produced a typically impressive turn of foot to hit the line in style; withstanding an eye-catching late challenge from multiple Group 1 champion Santa Ana Lane.

“She’s so speedy and tough and she’s had a good prep,” Currie said after the race.

“She went to Sydney and Tony had to change with all the wet tracks up there and brought her back here, which was a smart move and she’s on track to run a great race in The Everest.

“She’s having a good blow now and through her last few preps, she’s improved with racing. She’s got the two-week break now into the big one. I think she’s got a bit of improvement in her.”

Trainer Tony McEvoy was thrilled with Sunlight’s performance in the Gilgai Stakes and is confident she’ll be ready to peak in The Everest.

“You point her at these high-quality races and she’s always there for you. It’s a great quality that she’s got, and she was in for the fight today with a big weight on her back.

“When we bought her as a yearling, she looked like she had substance, and she’s really carried it through. What she’s doing for our brand and now taking us to that big race (The Everest), it’s so exciting.

Santa Ana Lane produced what was undoubtedly the run of the race to finish a close-up second and will take a power of beating second-up in The Everest.