Everest Could Be on the Cards for Silver Shadow Winner Libertini

August 24, 2019 by Ryan Cook
Home > Everest Could Be on the Cards for Silver Shadow Winner Libertini

Libertini had it all too easy at Randwick on Saturday, blazing away to win the Group 2 Silver Shadow Stakes (1200m) by three lengths in an impressive leadup into the Spring.

After settling in nicely along the rails, jockey Tommy Berry moved up into a three-wide position at the turn with plenty of horse still underneath him. Down the straight, Berry hardly had to touch Anthony Cummings’ impressive three-year-old as the filly shifted through her gears without a fuss.

“She quickens without you even feeling it, that’s why I looked at the big screen to see how far they were away,” an elated Berry said after the race.

“She pulled away pretty easy, so for her to run that sort of time and ease down last over the last 400m, it’s pretty impressive.” 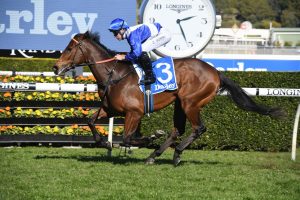 Libertini, above, stole the show at Randwick on Saturday winning the Silver Shadow Stakes by 2.5 lenghts. Photo Credit: Steve Hart.

Libertini was first-up at Randwick on Saturday after two very impressive trials leading in. The I Am Invincible filly won back-to-back starts at Randwick and Scone to close out the Autumn and will now look ahead to winning a Group 1 during the Spring.

“Yeah. She is that good. Today was another step in proving that” Cummings told Sky Racing.

“I thought she could win as comfortably as that. Maybe the others might run on more strongly. I didn’t expect the race to be run as quickly as it turned out to be. She’s that adaptable it doesn’t matter.”

The long-term plan ahead remains unclear, but it looks as though Cummings has a very serious sprinter on his hands.

Not surprisingly, the bookmakers agree. Libertini has firmed from $26 into $12.00 ahead of The Everest on October 19 and $12.00 into $7.00 for the Coolmore Stud Stakes in November.

Saturday’s race was run in a speedy time of 1:07.93, highlighting just how impressive Libertini was over the final 600m.

No matter where the filly winds up in the Spring, Berry knows he’s riding a good one.