Trainer Kris Lees chases his first success in the time-honoured Group 1 $3 million Doncaster Mile (1600m) on Saturday in Sydney saddling-up the favourite Mugatoo, but withdrawing his other acceptor Gem Song. 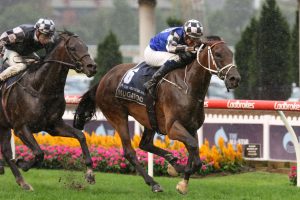 Gem Song has officially been scratched from the Doncaster Mile field on Day 1 of ‘The Championships’ paving the way for the Brad Widdup-trained emergency Icebath (2) to gain a start with just 50.5kg.

The widely-drawn withdrawal had barrier 19 and was last seen running fifth under two lengths beaten in the Group 1 George Ryder Stakes (1500m) at Rosehill.

Lees will send Gem Song, winner of the Group 3 Newcastle Newmarket Handicap last month, to the paddock after the horse was found to be lame on Thursday.

The stable remains a huge chance of securing this year’s Doncaster Mile trophy with the fellow Australian Bloodstock-raced Mugatoo carrying the equal 56kg top weight from gate four with Hugh Bowman aboard.

Bowman rode the mighty Winx to victory in the race back in 2016 and returns with another shot at the title this weekend partnering the imported favourite.

Mugatoo may be a six-year-old, but he has just his 19th start in the Doncaster and is undefeated over a mile.

Proven at the Randwick track, he was last seen securing the $5 million The All-Star Mile (1600m) at The Valley on March 13 with Bowman in the saddle.

He has been kept fresh for the Doncaster assignment and presents fit here as the current $4.40 top elect in the markets at Ladbrokes.com.au.

Icebath has been slashed from $34 to $20 since gaining the start with jockey Jay Ford retaining the ride.

The four-year-old mare comes off a brave but underrated to Nimalee in the Group 2 Emancipation Stakes (1500m) from last Saturday.

The Golden Eagle runner-up was a controversial initial omission from the Doncaster Mile final field of 20.

Group 1 Surround Stakes winner Forbidden Love and Rock for Team Hawkes overtook her in the order of entry after her benchmark performance was lowered by two points.

Racing NSW handicappers made the decision after her fourth placing last weekend, but she now gets the chance to atone.

Icebath is also out to go one better than her two-time Doncaster Mile second placed sire Sacred Falls and will relish the wet conditions with her Golden Eagle placing from last year taking place on a Heavy (9).

Despite the size of the field, the only other runner at single-figure Doncaster Mile odds along with Mugatoo is the Annabel Neasham-trained Mo’unga at $7.50.

Set to fly getting in on only 49.5kg, the gun Savabeel colt suffered a blow drawing the second outside barrier (21 into 19).

He too has Heavy track form however and was excellent third-up at Rosehill last start when winning the Group 1 Rosehill Guineas (2000m).

In her first year as a trainer, Neasham has not only Mo’unga but another two runners in the Doncaster Mile line-up with stablemates Olmedo (5) and Zaaki (22) to be ridden by Tommy Berry and Regan Bayliss respectively.

“I certainly didn’t foresee having three horses in the Doncaster,” Neasham told The Daily Telegraph.

“I am excited but I don’t have a moment in the day to think about it.

“Unfortunately, the barrier drawn by two of them is in the carpark.

“Although that will suit Mo’unga and give him some room to gallop.”

The Star Doncaster Mile is set to run as Randwick Race 9 at 4:35pm (AEDST) on Saturday’s bumper 10-race card.