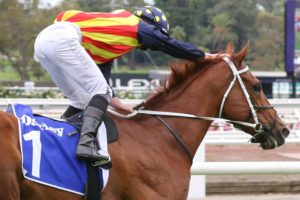 Displaying once again his terrific ability down the iconic Flemington ‘Straight Six’, the now seven-year-old produced a breathtaking performance on the back of his win in the $15 million The Everest (1200m) in Sydney.

“He’s a very special horse I think longevity is the key with these good horses,” Waller said after enjoying his 130th career Group 1 success.

“It was good to bring him down here today it’s a long prep for these horses and to hold them up I think is a credit to my team.’

It was the fifth straight year the Darley Classic winner came out of The Everest, Nature Strip having also won the race back in 2019 after a third to stablemate Yes Yes Yes in the world’s richest handicap.

It was a flawless and sharp victory in a time of 1:08.78 from Nature Strip, who could now be Royal Ascot bound in England.

“Just go through the basics, give him a holiday which is what he deserves and then find some nice races and maybe overseas if the owners are keen,” Waller said.

“We dare note complain. Racing’s continued and we should all be very proud here in Australia.”

Taking his prize money earned up over $15 million, Nature Strip looked in a league of his own and was far too good for his rivals leading from barrier to box.

McDonald went straight to the front up the middle of the track, where only a Tuesday he won the Group 1 $8 million Lexus Melbourne Cup for Waller aboard star mare Verry Elleegant, with beautifully matured Nature Strip traveling well and exploding when McDonald hit the button inside the final furlong.

“So much fun! Obviously, we’ve experienced the straight twice on two really superstar horses and they’ve both delivered in style.

“Nature Strip was nothing short of brilliant today. He’s had a great campaign this prep and he’s just a marvellous horse.”

Nature Strip left them behind as a $1.28 favourite should and went on to defeat the brave Leon & Troy Corstens-trained Swats That by over three lengths.