The bookies had the 2021 Champagne Stakes results nearly spot-on at Royal Randwick with second elect Captivant finishing strongly off a lovely ride from the inside alley to beat the favourite Hilal by a half-length in the time-honoured two-year-olds’ classic. 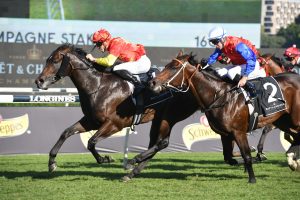 It was the 161st edition of the Group 1 $500,000 Moet & Chandon Champagne Stakes (1600m) on All Aged Stakes Day in Sydney and the event was won in an exciting finish by the now valuable Capitalist colt Captivant.

He was given a beautifully timed and executed ride from barrier one by jockey James McDonald who celebrated Group 1 win number 62.

McDonald allowed Captivant, last seen running third in the Group 1 Inglis Sires’ (1400m) at the Randwick track a fortnight back, in the second half of the field as Maurice’s Medad led them around at a strong pace.

Also settled towards the back was the Hawkes Racing-trained favourite Hilal, second in that same key lead-up behind Anamoe who was a non-acceptor for the Champagne Stakes over a mile.

Maurice’s Medad was tackled on the straight originally by the Gai Waterhouse & Adrian Bott-trained Converge on the quick back-up off his Fernhill Handicap win last Saturday.

Inside the final furlong however it was McDonald aboard Captivant and the favourite Hilal who jockey Tommy Berry had to ride a little wide throughout finishing off the best.

After a good battle it was Captivant who won by a half-length over Hilal with the trifecta completed by Converge.

It was the second win in as many years for Peter & Paul Snowden who also took out last year’s event with their Inglis Sires’ champion King’s Legacy (2020).

For co-trainer Peter Snowden, he celebrated his fifth Champagne Stakes victory in total having also previously prepared Skilled (2009), Helmet (2011) and Guelph (2013) for their victories in the autumn feature.