Gai Waterhouse and Adrian Bott-trained two-year-old Farnan has booked his spot in next months $3.5 million Golden Slipper race after taking out the Group 2 Silver Slipper (1100m) in comfortable fashion at Rosehill on Saturday.

The colt by Not A Single Doubt put paid to his Golden Slipper doubts by running in for a comfortable 3L victory on the soft track. It was another classy ride by jockey Hugh Bowman that did the trick as the pair found themselves sitting one off the fence at the turn before kicking away easily for a win at the 250m mark. 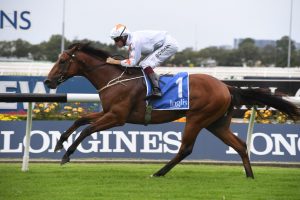 Farnan was one of five single-digit chances chasing the odds-on favourite Cellsabeel, who entered the race heading the Golden Slipper market at $7.00. Things went pear-shaped quickly for the two-year-old filly though, as jockey Tommy Berry got away slowly from barrier 2 before struggling to make up ground down the straight.

Bott was on hand to witness the win on Saturday and said that the stable will now address whether they will head to the Group 2 Todman Stakes at Randwick on March 7 before the Slipper or take a different path entirely.

“I think there was improvement to come out of today’s race,” Bott said. “He is a horse that races well fresh, so we’ve got that to consider going to the Golden Slipper now.

“We’ve got to see what is the best path. Originally we thought the Todman if we needed it, but we’ll assess how he comes out of today and over the next few days and then decide if he goes into the Slipper and if that’s the best path and course of action for him.”

The win marked Farnan’s third from four career starts after running a disappointing 10th in the Magic Millions 2YO Classic at the Gold Coast in January.

Not surprisingly, Farnan has now firmed from a whopping $51 into the $8.00 second-elect behind Hanseatic in Ladbrokes’ All-In Golden Slipper market.

Only six horses have completed the Silver Slipper-Golden Slipper double, with She Will Reign being the last to do so in 2017.

After finding herself with plenty of work to do late, the bookies have also reacted accordingly by moving Cellsabeel from $7.00 out to $12.00.

Global Quest, meanwhile, found something extra at the 100m mark on Saturday for an eye-catching second.

The Chris Waller colt has firmed from $26 into $19 for the Slipper, while North Pacific also looks one to watch after flashing home late for third.