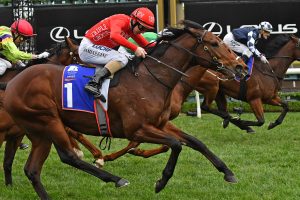 Brave Song (pictured at Flemington_ saluted for the punters in the last at Eagle Farm on Tattersall’s Tiara Day 2019. Photo: Ultimate Racing Photos.

Capping off a top day for Hong Kong-bound hoop Blake Shinn, the Peter & Paul Snowden-trained Your Song four-year-old Brave Song came into the sprint on the back of three straight seconds.

The latest was a devastatingly close finish behind Pretty In Pink at Doomben on June 1 in the Group 2 Moreton Cup (1200m), the form of which he franked in the 2018/19 racing season’s final Group 1 race meeting.

The punters were happy to give the consistent gelding another chance and this time he didn’t disappoint, Brave Song saluting as the well-backed $3.10 favourite through Ladbrokes.com.au.

Earlier in the day Shinn rode a winning double (Kordia Race 2, Vega One Race 4) and also enjoyed four second placings including on the Godolphin filly Pohutukawa who was just edged out by Invincibella in the Group 1 $500,000 Tattersall’s Tiara (1400m).

Shinn jumped away sweetly from the inside alley on Brave Song in the W.J. Healy before letting the horse drift back off the pace.

The galloper was tracking further back than expected, but on the straight Shinn found the clear run for the line, improving from third last to first without a worry to finish over the top of his rivals with an absolute peach of a ride.

“It would have been fantastic to take out the Group 1, but three winners and a couple of seconds in my last meeting of the carnival I couldn’t ask for a better way to leave Queensland,” Shinn told Racing Queensland.

A bargain buy for under $70,000 at the Inglis Classic Sales, Brave Song has now won in excess of $600,000 after posting his sixth career win.

It was an all Inglis graduates quinella too with Brave Song defeating the Mark Currie-trained Amanaat, while Godolphin’s $31 roughie Intuition rounded out the trifecta in third.

The form looks good for Brave Song next prep too with four of the last five WJ Healy Stakes winners going on to at least place at Group level later in their careers.