A wide barrier draw has seen Booker drift in the betting for the 2018 Ladbrokes Oakleigh Plate (1100m) at Caulfield on Saturday. 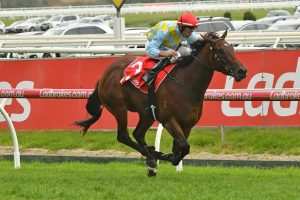 Booker has the chance to record a maiden Group 1 win in the Oakleigh Plate. Photo by: Ultimate Racing Photos

Booker’s price has lengthened from $7.50 to $9.50 at Ladbrokes.com.au on race eve after barrier sixteen was drawn in the original barrier draw.

The Written Tycoon three year old filly will most likely jump from gate fourteen in the final field of eighteen if both the emergencies fail to get a run.

Co-trainer Mark Zahra, who trains in partnership with Mathew Ellerton, is hoping for some early luck so apprentice Ben Thompson can find some cover in the early and middle stages.

“The barrier is probably a tale of woe but there should be enough speed and hopefully she can get a nice run from there,” Zahra told AAP.

“If she is three wide with cover sobeit.”

The speedy Booker returned from a spell to kick off her Autumn Carnival campaign in great style with an all the way win in the Group 3 $150,000 Kevin Hayes Stakes (1200m) at Caulfield on February 10.

Booker is one of four runners Zahra and Ellerton will saddle up in the Oakleigh Plate and will be joined by stablemates Flamberge, Rock ‘N’ Gold and Sword Of Light.

Booker is the shortest priced runner for the Zahra – Ellerton stable while the top weight Flamberge, who was the 2016 Oakleigh Plate winner when prepared by Peter Moody, is rated at $15 to collect the winning trophy again.

Flamberge showed glimpses of his old form with a last start second to Super Cash in the Group 2 $200,000 Rubiton Stakes (1100m) at Caulfield a fortnight ago.

“He probably looked better on the Monday after that run and we were over the moon the way he bounced through,” Zahra said.

“He will run a good race with plenty of weight that he has done in the past.”

Flamberge has been lumped with the top weight of 57kg after the initial weights were raised 1.5kg at final acceptance time when Team Hawkes decided against running the original top weight Chautauqua who has been allocated 58kg.

The veteran sprinter drew barrier eight in the original draw but could jump from six with Damian Lane in the saddle again.

The Peter and Paul Snowden trained Russian Revolution sits at the of the betting charts at $4.80 at Ladbrokes.com.au just ahead of last year’s Golden Slipper winner She Will Reign at $6.50 and the Lindsay Park trained three year old filly Catchy at $9.