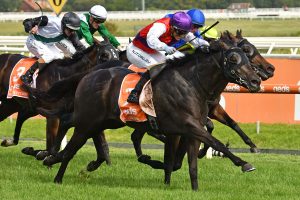 The world’s richest race for two-year-old drew 16 final acceptors including Rocket Tiger and Artorius as the late entries at a cost of $150,000 to connections.

Flying Artie colt Artorius is yet to race outside of Melbourne and hasn’t run since his Group 1 upset in the Blue Diamond at Caulfield back on February 20 at $15.

He has drawn wide for the Slipper out in gate 13 this weekend, Luke Currie retaining the ride, and is currently rated an $8 chance in the markets at Ladbrokes.com.au to complete the double for the first time since Sepoy (2011).

Despite his glowing CV, trainer Chris Waller is yet to taste success in the Slipper and saddles-up three runners in this weekend’s field.

His $2 million Magic Millions 2YO Classic champion at the Gold Coast in January, Shaquero, bounced back last Saturday saluting in the Group 3 Pago Pago to earn his shot at the Golden Slipper.

The colt is at $34 to salute on successive Saturdays however after a wide gate 15 draw for jockey Kerrin McEvoy to overcome.

McEvoy on the 2011 Golden Slipper on the aforementioned champion Sepoy.

Home Affairs is drawn a treat in barrier two for jockey James McDonald who saluted aboard the Hawkes Racing-trained filly Mossfun back in 2014.

Following his Silver Slipper victory at Rosehill in February, I Am Invincible colt Home Affairs raced again on March 6 at Randwick when only a half-length back third at big odds behind Anamoe and Profiteer in the Group 2 Todman Stakes (1200m).

The Todman Stakes form is the one the bookmakers are tipping to stack-up in the big one on the weekend with the runner-up, Profiteer, heading the current Golden Slipper markets at $4.

Equal on that price is the Richard & Michael Freedman-trained Extreme Choice colt Stay Inside drawn in gate four and coming off a fourth in the Todman.

Looking to complete the Todman – Slipper double meanwhile is Anamoe from the Godolphin stables out to $13 after coming up with the outside alley.

The stable won the fillies’ equivalent race with Thermosphere in the Magic Night, but have opted not to accept for her in the Golden Slipper Stakes.

Other notable hopes in the line-up include Team Snowden’s Group 3 Black Opal winner Kalashnikov drawn the inside alley and John Sargent’s undefeated Snitzel filly Four Moves Ahead at $8 after her lead-up Group 2 Sweet Embrace Stakes win over the distance.