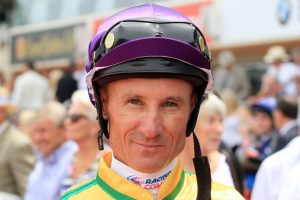 Eagle Farm is host to the last of the Magic Millions lead-up events as the countdown to the $10 million feature race day at the Gold Coast next month heats up.

Current co-favourite for the 2020 Magic Millions 2YO Classic, the Chris Waller-trained Blondeau is on show as the top elect through Ladbrokes.com.au in this summer’s BJ McLachlan Stakes field.

The set weights event attracted just 10 juvenile runners including Waller’s highly-spruiked I Am Invincible colt Blondeau who leads betting at $2.70 after bypassing a run in Thursday’s $60,000 Headwater @ Vinery Maiden (1100m) in Sydney on Boxing Day.

Drawn in gate nine with jockey Glen Boss chasing his third win in the past 20 years, Blondeau is out to further frank the form from a two-years-old set weights race held at Rosehill on December 11.

The youngster debuted in the 1200m event running second to the Peter & Paul Snowden-trained Aim who went on to win the $125,000 Mode Handicap (1200m) at Randwick last Saturday.

The impressive four-length explosive victory by Aim in the Mode Handicap saw he and the horse he beat on debut Blondeau firm into $6 co-favouritism in all-in Magic Millions Classic odds for next month.

Now Blondeau gets his shot to secure a sole spot at the top of those Magic Millions markets with his own next-up success in the BJ McLachlan Stakes.

Boss believes his ride on Blondeau last time out, when getting caught wide before hitting the front late only to be run down in the closing stages, was his worst for 2019 and is hoping to make amends in Saturday’s Group 3.

“I had some good ones, but that was my brain snap of the year. It was a bad ride, but he’s a really good colt.

“He went into that off a pretty soft trial and had a pretty tough run and blew out with me.

“I said to Chris, ‘Obviously it was a bad ride, blah blah blah, but he’s one of those colts that’s just going to bounce big time off that run’.

“Chris was concerned he might have had to do it too tough, but the horse has done exactly what I thought. He springboarded off that run and it’s really brought him on.

“The form has been franked pretty solidly. There’s no doubt Aim looked very good (on Saturday) and he was impressive.

“I think he beat ordinary horses, but visually he was good and the clock was good.

“It (the BJ McLachlan) seems the right race for him, 1200m Eagle Farm in a good race and you really find out where you are.

“If you can’t beat these, he’s not going to be winning a Magic Millions, so you will know straightaway.”

The rival most likely to stop that from happening according to the bookmakers is Mark Newnham’s Group 3 winning filly Every Rose ($3.20).

The daughter of Choisir won Randwick’s Group 3 Gimcrack Stakes (1000m) on debut back in early October before resuming with a second as the beaten favourite first-up on December 12 in the $200,000 Wyong Magic Millions 2YO Classic (1100m).

Every Rose is drawn for an ideal run second-up in the BJ McLachlan Stakes from gate three with her Gimcrack Stakes winning jockey Josh Parr coming back aboard after Rachel King rode the filly at Wyong.

Another of the top hopes for the Magic Millions Classic, Every Rose is currently a $7 chance for the $2 million feature in a fortnight’s time.

Team Snowden meanwhile could get the chance to add King’s Legacy to the Magic Millions Classic field along with Aim with the former chasing a spot in the race via the BJ McLachlan.

Redoute’s Choice colt King’s Legacy was a $21 outsider in betting on debut back on December 11 in the Rosehill race won by his boom stablemate and finished under two lengths back third after being badly blocked for a run.

Redemption will be on the minds of the stable, who won the Magic Millions Classic back in 2016 with Capitalist, when the untapped bay races again this weekend paying $8 and drawn in gate four for hoop Kerrin McEvoy.

“Hopefully he can redeem himself,” Paul Snowden said on radio this week.