Upset Group 3 Aurie’s Star Handicap winner So Si Bon has a number of Group 1 spring targets on the agenda this prep having run out of his skin first-up down the iconic ‘Straight Six’ at Flemington. 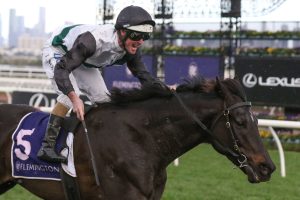 The Lindsay Park-trained So You Think six-year-old posted his first victory since December last year when saluting as a $21 outsider in the Group 3 $160,000 Aurie’s Star Handicap (1200m).

So Si Bon has now won three of his 38 career starts and will be given his chance in elite grade over the Melbourne Spring Racing Carnival according to Hall of Fame trainer David Hayes.

Hayes described the flashing Aurie’s Star Handicap win by So Si Bon, who was ridden to victory by Luke Nolen of Black Caviar fame, as “fantastic”.

Indeed, So Si Bon caught the eye fresh when running down the Neville Parnham-trained front runner Malibu Style in the final 200m to run away with the Group 3 at HQ.

Beaten favourite Sesar meanwhile was also excellent late making up ground to run third in a three-way photo to round out the trifecta.

So Si Bon was gelded ahead of his autumn campaign earlier in the year, the preparation producing a Group 2 Blamey Stakes (1600m) second and close fourth when just over a length beaten in Flemington’s Group 1 Australian Cup (2000m).

He also chased home Winx on a Heavy (8) Rosehill track in late March when tested in the Group 1 George Ryder Stakes (1500m) before his dead last (20th) behind Brutal in the Group 1 Doncaster Mile (1600m).

The galloper is now a “fully-fledged gelding” according to Hayes who named the Group 1 $500,000 Ladbrokes Sir Rupert Clarke Stakes (1400m) on September 21 and the Group 1 Toorak Handicap (1600m) at Caulfield on October 12 as the main aims.

“We took a fresh approach and coming into the race we were quietly confident.

“I was worried the winter form might hold up on the heavy track but he got through it.

“He ran forth in an Australian Cup just gelded, now he’s a fully-fledged gelding.

“He’s got pretty good form so we’ll probably head towards the Rupert Clarke and Toorak as the main aims.”

So Si Bon, who pays $15 in pre-nomination Sir Rupert Clarke Stakes betting at Ladbrokes.com.au, also holds a nomination for the iconic Group 1 $5 million Ladbrokes Cox Plate (2040m) at The Valley this October.