A last to first win by Attorney in the Group 3 $160,000 JRA Colin Stephen Quality (2400m) at Rosehill today has seen his price slashed for The Metropolitan next week. 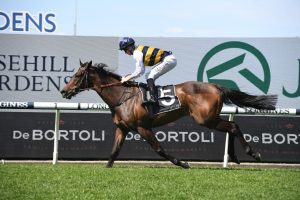 Attorney, above, wins the Colin Stephen Quality at Rosehill. Photo by Steve Hart.

The Matthew Smith trained Attorney was always well back in the field before drifting back to last on the point of the home turn.

Winning jockey Jason Collett elected to stick to the fence and Attorney ($4.40) tracked up nicely before switching across the heels of the leader Zacada at the 250m.

Attorney was strong to the line and went on to record a 1.3 lengths win over the well supported Chris Waller trained Djukon ($6.50).

The winner’s stablemate Grey Lion ($6.50) raced in the first four for the majority of the race and battled on well in the straight for a close up third.

The $3 favourite Exemplar raced on the pace but faded in the straight to finished last of the seven, 7.8 lengths from the winner.

Smith said that he would make a decision early next week if Attorney backs up next week in The Metropolitan.

“He’s in there. Better judges than me can make that decision. We’ll go back and have a think about that one,” Smith said.

Attorney was steppinh up sharply in doistance today after finishing fourth in an 1800m Rosehill BenchMark 78 Handicap but Smith was confident that he would handle the 2400m.

“The European horses can do it. It was the first time we’ve done it. For myself as a trainer to get them to jump up quickly in distance. He enjoyed the good gallop today and found the line which was good,” Smith said.

“I think I’m doing a better job this time in. Last time in I got lost, the horse didn’t get lost. He’s been training well. He’s been building up to this and good to see him do it.”

“I was just happy to see him switched off. We wanted a reasonably genuine gallop not a stop start race. He got into a nice rhythm, looked comfortable. It worked out he got the nice runs.”