Alligator Blood in the red in Magic Millions 3yo Guineas betting

January 10, 2020 by Mark Mazzaglia
Home > Alligator Blood in the red in Magic Millions 3yo Guineas betting

Rival trainers are trying to devise a plan to beat Alligator Blood who remains in the red in the betting for the $2m Gold Coast Magic Millions 3yo Guineas (1400m) at the Gold Coast on Saturday. 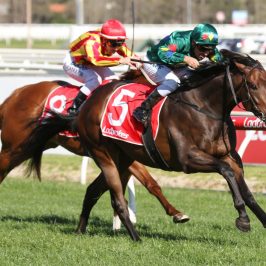 Alligator Blood, above, is the odds on favourite for the 2020 Magic Millions 3yo Guineas. Photo: Ultimate Racing Photos.

Bookies at Ladbrokes.com.au have shortened the David Vandyke trained Alligator Blood into $1.75 while his nearest rival is Mark Newnham’s Diamond Thunder at $14 just ahead of the Peter and Paul Snowden trained Leviathan at $15.

Newnham will put the blinkers on Diamond Thunder in the hope that the three year old gelding can settle a bit closer to the speed but admits that Alligator Blood would still need a lot of bad luck if he is going to get beaten.

“I have no illusions and we need to improve to beat Alligator Blood,” Newnham told AAP.

“But Diamond Thunder needs something to encourage him to get into his races earlier.

“He got away with it at Wyong but when they walked early at Eagle Farm he was never going to get them from three back on the fence.

“Hopefully, the blinkers will solve that problem but we are going to have to work out some tactics from his wide barrier.”

Co-trainer Paul Snowden also admits that Alligator Blood is the class runner and will need a lot to go wrong in the run if he is to be beaten.

“He’s going to have to run into a bit of trouble for anyone to be running him down. All being well and everything has its chance, I’m probably going to come up a length short.”

Alligator Blood was spelled after being beaten by a nose when runner up to Super Seth in the Group 1 $2m Ladbrokes Caulfield Guineas (1600m) at Caulfield during the 2019 Melbourne Spring Carnival but has been untroubled at his two runs back in the lead up to the Magic Millions 3yo Guineas.

Vandyke admits that the nerves are starting to take affect on him but said that Alligator Blood is coping well with the workload.

“The horses is in very good shape and he will be 100 per cent Saturday,” Vandyke told The Courier-Mail.

“He’s in a good place and I’m glad it’s him and not me going out there. I’m missing sleep and I’m anxious. I’m glad the sales are distracting me a bit.”

“He will probably jump from the middle of the field, he’s got pace, Ryan’s only got to sit there and it will unfold around him,” the trainer said.

“He will be wherever he ends up. He doesn’t have to do much on him the first 400m and he will find a position.”

Regular rider Ryan Maloney will team up again with Alligator Blood who will jump from gate eight in the sixteen horse Magic Millions 3yo Guineas field if all five emergencies fail to gain a start.