The time-honoured Sydney Cup turned into a boil-over at Royal Randwick on Saturday as 26-1 pop Selino won the race for a fifth time for trainer Chris Waller.

Since arriving over from Europe during the spring, the five-year-old stayer had been a consistent customer in work running fifth in the Group 3 Manion Cup at Rosehill last month before improving for fourth in last week’s Chairman Quality at Randwick over the 2600m.

Returning on the quick backup, Waller’s former apprentice Ron Stewart was booked to replace Craig Williams in the saddle, a move that paid dividends despite connections questioning it at first.

“A lovely patient ride from Ron Stewart who used to ride for an apprentice for us when he was in Sydney. It’s been a funny week really,” Waller told Channel 7. 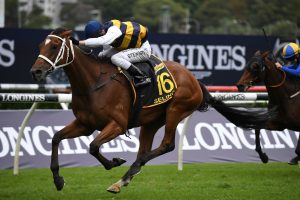 “The owners questioned me and who he was, but I said he was an apprentice here in Sydney, don’t worry. He rode successfully in Singapore, he’s rode well in Queensland, he’s a fit jock and he’s got a helicopter license, so he must have a few brains.”

After Williams found himself a little too far back in the Chairman’s Quality last week, Stewart chose to sit much closer on speed before pressing the button coming out of the turn to draw two lengths clear at the 300m mark.

Rondinella gave a late chase, but didn’t have enough left in the tank to catch the former Doncaster Cup place-getter.

“He was sent to me in very good form, I appreciate that to get the opportunity to train him because he could have been sent down with a European trainer,” Waller went on to say.

The win marked Stewart’s first Group 1 and number 124 for Waller.

There was no such luck for late-drifter Favorite Moon though, with the $6.00 chance failing to fire down the straight to finish 21 lengths off the winner.

Former Oaks winner Miami Bound finished off strong for third, while $5.50 favourite She’s Ideel was unlucky not to run a place.