The field for Saturday’s outstanding edition of the Group 1 $4 million Longines Queen Elizabeth Stakes (2000m) is down to just seven runners with Verry Elleegant dominating betting on the highly-anticipated autumn feature. 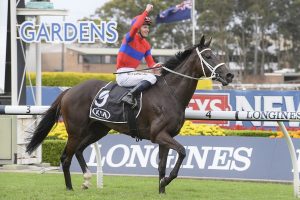 The scratching of the Bjorn Baker-trained Group 1 winner Samadoubt (6) was a blow for connections of the likely front-runner after he reinjured his off fore tendon and now faces an early retirement.

Markets have now firmed on Chris Waller’s outstanding mare Verry Elleegant to post her incredible ninth Group 1 success and third on the trot.

The flying daughter of Zed wont he Group 1 Chipping Norton over a mile second-up before turning the tables on William Haggas’ champion English raider Addeybb in the Group 1 Ranvet Stakes (2000m) at Rosehill on March 27.

She ran second in that race last year as well as the Queen Elizabeth behind Addeybb, with a Group 1 Tancred Stakes (2400m) between the two seconds.

The now five-year-old is out to make it an event two wins apiece when she again faces off against the defending Queen Elizabeth Stakes hero in Saturday’s showdown.

It was thrilling two-horse finish in the Ranvet and punters are tipping a similar stride-for-stride battle to take place again in the rematch, with Verry Elleegant again expected to finish on top.

The latest Queen Elizabeth Stakes odds at Ladbrokes.com.au list her at $2.40, with Addeybb following closely at $2.90.

The visitor presents fit second-up and gets the run of the race from barrier three with the in-form Tom Marquand, racing well down under this autumn, in the saddle once more.

“Last year was pretty special just in the circumstances more than anything but this year is different,” Marquand told Racenet this week.

“There is racing going on back home and the difference for me is last year the pressure was the fact that all eyes were on because there was no other racing.

“This year the pressure is on because I am here while racing is on back home and I am going to need to make the trip count.

“I am really looking forward to getting back on track Saturday, it should be a great race.”

Suited to the Slow-rated track at Randwick, Addeybb dons the blinkers for the first time here and presents as a livewire chance to go back-to-back in the lucrative event.

The standout field also features the spring’s Cox Plate champion Sir Dragonet ($6.50) who comes into the race on the back of a confidence-boosting victory in this season’s Tancred Stakes over the mile and a half.

Also at single-figures out to finish on top of the two champions that dominate the markets is the Kris Lees-trained $5 million The All-Star Mile winner Mugatoo ($7.50) drawn the rails and out to improve on a lead-up fourth in last Saturday’s Doncaster Mile.

Upset last-start Group 1 George Ryder Stakes winner Think It Over ($26) has been forgotten by the punters again, while recent Rosehill Guineas winning three-year-old Mo’unga is at $17.

Class Dalakhani entire Dalasan ($34) backing-up from his shock Doncaster third at a blowout price last weekend rounds out the field and markets.

The Queen Elizabeth Stakes is scheduled to run as Randwick Race 8 at 3:50pm (AEST) on Saturday’s bumper 10-race card.