Grant & Alana Williams’ star WA-trained mare Celebrity Queen will be looking to continue her excellent autumn in Melbourne when she takes on star fillies September Run and Swats That in the Group 1 $1.25 million Seppelt Wines Newmarket Handicap (1200m). 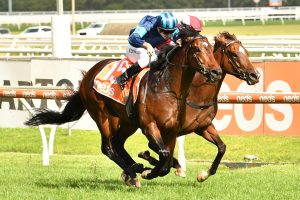 Celebrity Queen (inside) runs in the 2021 Newmarket Handicap off a dead-heat win in the Oakleigh Plate. Photo: Ultimate Racing Photos.

The four-year-old daughter of Redoute’s Choice came to Melbourne on the back of an ultra-consistent record at home in Perth that included a second in the Group 1 Winterbottom Stakes (1200m) last November.

Celebrity Queen made an immediate impact at Caulfield on Neds Blue Diamond Stakes Day saluting in the Group 1 Oakleigh Plate (1100m) with the ‘Wizard of the West’ William Pike in the saddle for the thrilling dead-heat victory with Portland Sky.

She is second-up on ‘Super Saturday’ heading to HQ for the Newmarket Handicap and after her elite level success in the Oakleigh, rises from 53.5kg to 56kg chasing back-to-back wins after weights were raised two kilograms.

The latest Newmarket Handicap odds at Ladbrokes.com.au have her at $14 to score another upset and Pike remains confident he’s on the right mare despite the extra weight.

“If you take a few big names out, the race becomes a bit easier, so it makes sense that she’d get more weight,” he told Racenet.

Celebrity Queen is out to become the 12th horse in history to complete the Oakleigh Plate – Newmarket Handicap double, the feat last achieved by Lankan Rupee (2014).

Craig Williams continues his association with the Exceed And Excel filly who beat home the boys by nearly two lengths in the Group 1 Coolmore Stud Stakes (1200m).

September Run was three-from-three at Flemington after that and resumed in the Group 1 Black Caviar Lightning (1000m) in mid-February.

Over the short distance, the three-year-old was ultra-impressive doing some great work in the closing stages to cross just a half-length second to her ace stablemate, Australian Horse of the Year Nature Strip.

Waller has opted to keep Nature Strip to the shorter distances and has sent the horse to Sydney this weekend to defend his title in Randwick’s Group 2 $500,000 Challenge Stakes (1000m).

His withdrawal from the Newmarket Handicap entries as the original top-weight saw the increase in kilos to the remaining runners.

September Run meanwhile stays in Melbourne and is tipped to return to winning form and dominate the Newmarket Handicap results.

The danger occupying the second line of betting at $7.50 through Ladbrokes.com.au is another flying filly Swats That who has twice finished in the money behind September Run.

The Leon & Troy Corstens-trained daughter of Shamus Award was runner-up in the Coolmore Stud Stakes on VRC Derby Day and kicked off her autumn with a Black Caviar Lightning third.

She too will take improvement off that run and gets in on the new 52kg minimum in the Newmarket, but has drawn the outside alley in a big field.