Australia’s most in-form jockey took to Randwick for the first time aboard the Godolphin galloper and it didn’t take long for her to show the same class we’ve come to expect over the last 12 months.

Kah had never raced at Randwick coming in, but she again showed why she is considered one of the best in the business aboard the $14 pop.

With all eyes fixed firmly upon All-Star Mile winner Mugatoo on the inside, the pair swept clear out wide to win the Doncaster in a photo – in large part thanks to a brilliantly timed run from well back in the field.

Kah has become well known for getting the best out of her rides, and not surprisingly, winning trainer James Cummings was singing her praise. 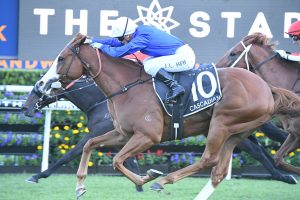 Jamie Kah capped off Day 1 of The Championships with a brilliant win aboard Cascadian in the $3 million Doncaster Mile. Photo: Steve Hart.

“He’s just had a fantastic preparation, we’ve kept him nice and lean. He got to the race beautifully, got the right draw and we kept our eye on Jamie Kah, she’s been riding winner after winner,” Cummings told Channel 7.

“There’s daylight second between her in Melbourne at the moment, and I had every bit of confidence that she had the ability to transfer that to Sydney, and we were very quick to snap her up for the Doncaster.”

Cascadian was largely overlooked from a betting perspective despite a very consistent spring.

The six-year-old Irish import turned in a tough performance for second behind Yulong Prince in the Kennedy Cantala at Flemington over the mile in October, before returning to work last month to run third in the Newcastle Newmarket and fourth in the George Ryder at Rosehill.

“He hasn’t won a stack of races since he’s been here, but he’s very rarely run a poor one,” Cummings went on to say.

Despite winning the Prelude, Cascadian failed to fire in last year’s Doncaster after striking a heavy track.

With two wins to his name over the mile though, there was no question he was capable of playing a major factor on Saturday.

Icebath did well to get up for second along the rails, while Dalasan showed strong improvement for third after what has been a rather forgettable autumn so far.

Race favourite Mugatoo looked the winner at one point but just weakened out for fourth.