The Ciaron Maher and David Eustace team added another notch to their belt at Randwick on Saturday by taking out the Group 1 Australian Derby with lightly-raced New Zealand import Explosive Jack.

Punters were happy to side with the favourites in Montefilia and Sky Lab right before the jump, but it was the three-year-old colt by Jakkalberry who managed to upstage the lot with a very tough run out wide to win right on the line.

In what was his only ride of the day, John Allen proved the key as the winning hoop made up a stack of ground from the rear of the field to race past the fast-finishing Lion’s Roar and Young Werther over the final 100m.

Explosive Jack was installed as a 14-1 shot in the Ladbrokes market, which may have been a touch over the odds coming off a win in the Listed Tasmanian Derby three runs back. 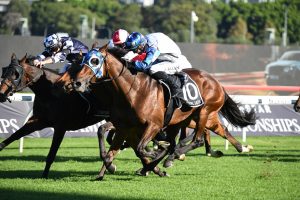 Explosive Jack (outside) wins the $2 million Australian Derby on Day One of The Championships at Royal Randwick. Photo: Steve Hart.

“This horse, we’ve moved him around, he was in Victoria and he came up here. John Allen actually thought the Tassie Derby would be a good race for him and we thought with the ease of that we’d target this,” Ciaron Maher said after the win.

“Ten out of ten ride to Johnny, probably just his knowledge of the horse, and the team, he’s been to just about every stable all up the eastern coast for us. He’s just a fantastic horse and just an even more fantastic bunch of friends and owners.”

After his win in Tasmania, Explosive Jack went on to run third in the Group 2 Alister Clark Stakes at Moonee Valley last month before showing strong improvement two weeks ago Bendigo over the 2200m in the Listed St Leger Trial.

Despite a rough start to his career, Maher went on to say that he always thought his horse was in good order heading into his maiden Group 1.

“He gives his all. We gave him a gallop at Werribee last Saturday and I wanted that to be his strongest piece of work to just bring him in nice and fresh.

“Johnny got off, he looked at me and said that might be the best bit of work that horse has ever done. So we knew he was well, he traveled up, and I actually gave him a swim that afternoon and he was squealing. He’s a very quiet horse, so we knew he was well and everything worked out.”

Montefilia just missed out on a place after bursting clear with a rails run in the late stages, while Young Werther held on to grab second over a very brave Lion’s Roar.