Fifty Stars is the clear favourite to go back-to-back with a successful title defence in Saturday’s Group 1 $1.5 million Australian Cup (2000m) at Flemington. 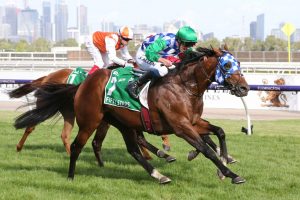 Fifty Stars if favourite to go back-to-back in the Australian Cup 2021 on ‘Super Saturday’ at HQ. Photo: Ultimate Racing Photos.

Veteran nine-year-old Harlem took out the race in 2018 and 2019 before a fourth last Melbourne Autumn Racing Carnival and is back for fourth shot on the weekend.

The fellow Tom Dabernig & Ben Hayes-trained Fifty Stars took out the race 12 months go on the back of a Group 2 Blamey Stakes success and is now the $4.20 top elect in Australian Cup betting at Ladbrokes.com.au to continue the stable’s gun run.

Only five horses throughout Australian Cup history, the race first run in 1863, have successfully defended their title.

It may have been a full year between wins for the Sea The Stars entire Fifty Stars, but he has been competitive in plenty since including a Group 1 Mackinnon Stakes (2000m) second at Flemington last November behind the brilliant WA-trained mare Arcadia Queen.

He presents fit third-up on the weekend set to relish the return to 2000m having last been seen finishing a neck back second in this year’s Blamey Stakes on February 27 over the mile.

“When I looked at him the next morning, I actually got a bit of adrenaline,” co-trainer Hayes told the media on Thursday.

“All his work this week has been fantastic, he’s been acting like a two-year-old, the signs are good … he just needs to do it race day.

“If he (Fifty Stars) wasn’t in the race it would be a very open race, obviously Group 1s are very hard to win and you’re never confident going in.

“We feel we have him in the best condition we have had him going into a race, hopefully he can perform.”

The danger in Australian Cup markets out to stop Fifty Stars from saluting for the punters is the Danny O’Brien-trained Paradee drawn the rails with Craig Williams coming aboard.

The classy Epaulette four-year-old has won her last three starts rising in grade with each performance including her three-quarter length victory in the Group 2 Peter Young Stakes (1800m) on Neds Blue Diamond Stakes Day.

Fiorente (2014) was the last horse to complete the Peter Young Stakes – Australian Cup double and there’s money on Paradee to be the next this weekend, the mare at a current quote of $6.50 through Ladbrokes.com.au.

The Peter Young Stakes produces a host of other Australian Cup horses this season including the Chris Waller-trained runner-up Shared Ambition ($10) in gate two with Mark Zahra to ride and third placegetter Homesman ($16) for Anthony & Sam Freedman.

The season’s best hoop Ms Jamie Kah has a strong book of rides on the weekend including aboard the Freedman’s other top chance in the Australian Cup, Peter Young fourth placegetter Steel Prince ($11).

The 2021 Australian Cup is set to run as Flemington Race 8 at 4:45pm (AEDT) as the penultimate event on Saturday’s card.