Noble Boy continued an outstanding few weeks for jockey Jason Collett, the gelding given a perfectly timed ride up the inside at Rosehill Gardens to take out the Listed $150,000 Winter Stakes (1400m). 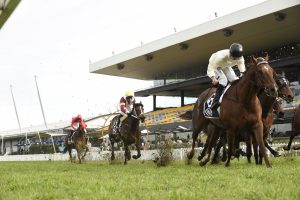 Collett has been on fire this winter including his victory in Thursday’s Grafton Cup and was back celebrating another Black-Type win in Sydney on Saturday.

Continuing his association on Bon Hoffa five-year-old Noble Boy, Collett was patient aboard the galloper he called a “push and go” type of horse waiting until the straight to come with his run.

Settled just off the pace with the returning Gai Waterhouse & Adrian Bott-trained Launceston Cup runner-up Taikomochi leading the field around, Noble Boy was produced at just the right time hard pressed against the inside rail on the Heavy track.

Collett wasn’t afraid to take the risk saving ground up the inside and it proved the right move as Noble Boy chased down the brave frontrunner for a narrow victory in the Winter Stakes.

“We’re just learning about him every day basically, every start,” Collett told the media post-win.

“We were pretty confident we had him pretty spot on today.

“When I come up the inside, I knew I had plenty of horse there.

“We’ve got a ready-made product and it’s starting to come together.

“I was travelling really well and they get through the (Heavy) ground okay when they’re travelling like that.”

Formerly prepared by Todd Blowes, Noble Boy was having his fourth run for Cunningham who said the key was to be patient and put the horse first.

Noble Boy looked like he was on the up at Rosehill last time out when running third to True Detective and subsequent Civic Stakes winner Trumbull in a Benchmark 94, but Cunningham had to wait four weeks to get him up to the 1400m distance.

The patience and plan paid off and Noble Boy was able to score not only his first win for his new stable, but his first victory since May of last year at Eagle Farm.

“Obviously being the first preparation, we had plenty to learn about him it’s just nice that the plan’s paid off.

“We’ve been rewarded today which is awesome.

“Just shows you, you do the right thing and you get rewarded.”

The Chris Waller-trained Order Again flashed home late for third in the Winter Stakes, while the favourite Trumbull failed to finish off running sixth despite being quick out the gates and settled fourth the fence in a lovely position throughout.