Godolphin four-year-old mare Flit lined the pockets of plenty at Randwick on Saturday by taking out the Silver Eagle (1300m) on her way to the $7.5 million Golden Eagle on October 31 at Rosehill.

The daughter of Medaglia d’Oro found herself up against impressive Australian Guineas winner Alligator Blood – a horse with plenty to prove following a doping scandal earlier in the year that robbed David Vandyke’s four-year-old of a Magic Millions win.

After finding herself three-wide coming into the turn, apprentice jockey Rachel King stoked up on the outside of Alligator Blood over the final furlong before pulling away to win by half a length at the line.

Flit was having her fourth run back from a spell coming off a nice trial at Hawkesbury a fortnight ago, but was somewhat unforgotten in the market as a $9.00 chance with Ladbrokes bookmakers.

“We just couldn’t see her running a bad race today and yet she was up against some pretty good opposition. She was smoking in behind Alligator Blood and Darren and I were hoping she would just wait and she waited enough” winning trainer James Cummings said.

“The horse has got a great turn of foot. She has marched herself right into contention for a couple of big targets over the next three weeks and it will be up to the boys which way they want to head with her.”

James McDonald found the money aboard the mare when second to Eduardo first-up in the Group 2 Missile Stakes, before Glyn Schofield found things a little tougher in the Group 1 Winx Stakes two weeks later.

King clearly had the magic touch on the mare on Saturday, although she was happy to pay full credit to Flit’s explosive turn of foot. 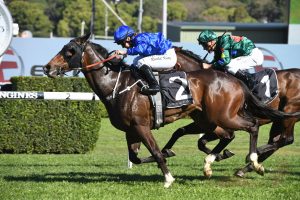 The Godolphin-trained Flit is now into single digits ahead of the $7.5 million Golden Eagle (1500m) on October 31 at Rosehill. Photo: Steve Hart.

“She actually pinged out of the gates, I was a little bit worried she might have overdone it to start with, but she came back really nicely and was able to follow Alligator Blood the whole way,” King said.

“He gave me a beautiful tow into the race and she was just able to explode today, when she’s in that form, she’s got an incredible turn of foot.”

Alligator Blood, meanwhile, was second-up after running a less-than convincing third in his return to the races at Doomben last month.

The two-time Group 1 winner was backed into $2.50 before the jump, but seemed to lack his usual turn of foot over the closing stages to leave many wondering about his future over the weeks ahead.

“Had a nice run. Winner too good” beaten jockey Ryan Maloney said after the race .